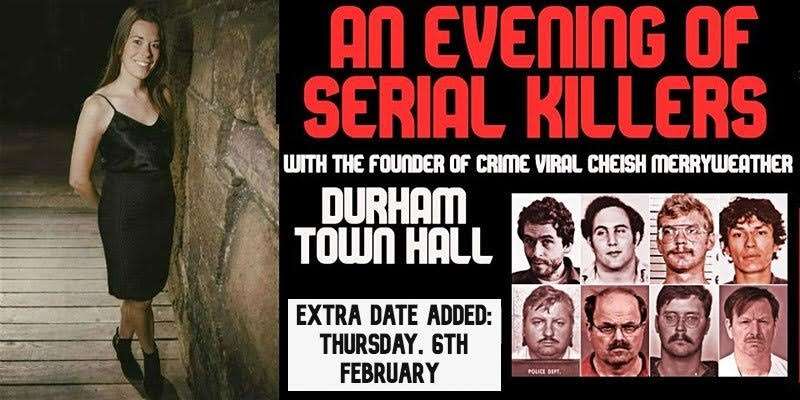 An Evening of Serial Killers focusing on the world’s most notorious cold-blooded killers is coming to Durham Town Hall. Hosted by Crime Viral founder and comedian Cheish Merryweather, this is an evening for anyone interested in all things true crime.

Talks on the evening are How To Raise A Serial Killer and How To Spot A Psychopath. Following a sold out night on Friday, 7th February, an extra date has been added due to high demand on Thursday, 6th February at Durham Town Hall on Market Place. Fans of the darker things in life are advised to snap up tickets early.

Cheish explained, “The big question is – are serial killers born or made? Analysing the childhoods, adolescence years and shocking crimes of serial killers; the audience will have all the research and evidence laid out in front of them to determine exactly what went wrong along the way.”

Adding, “These talks aim to educate, fascinate and contribute to the ongoing conversation surrounding true crime… with an injection of dark humour along the way.”

Founded in 2015, Crime Viral has grown to more than 220,000 Facebook fans and speaking of the upcoming talks, Cheish said, “True crime really is having its moment lately following the release of several serial killer specials on Netflix that gripped the public. I will be bringing together criminology and forensic psychology alongside real footage of interviews with some of the world’s most notorious cold-blooded killers.”

Continue Reading
You may also like...
Related Topics:Crime Viral