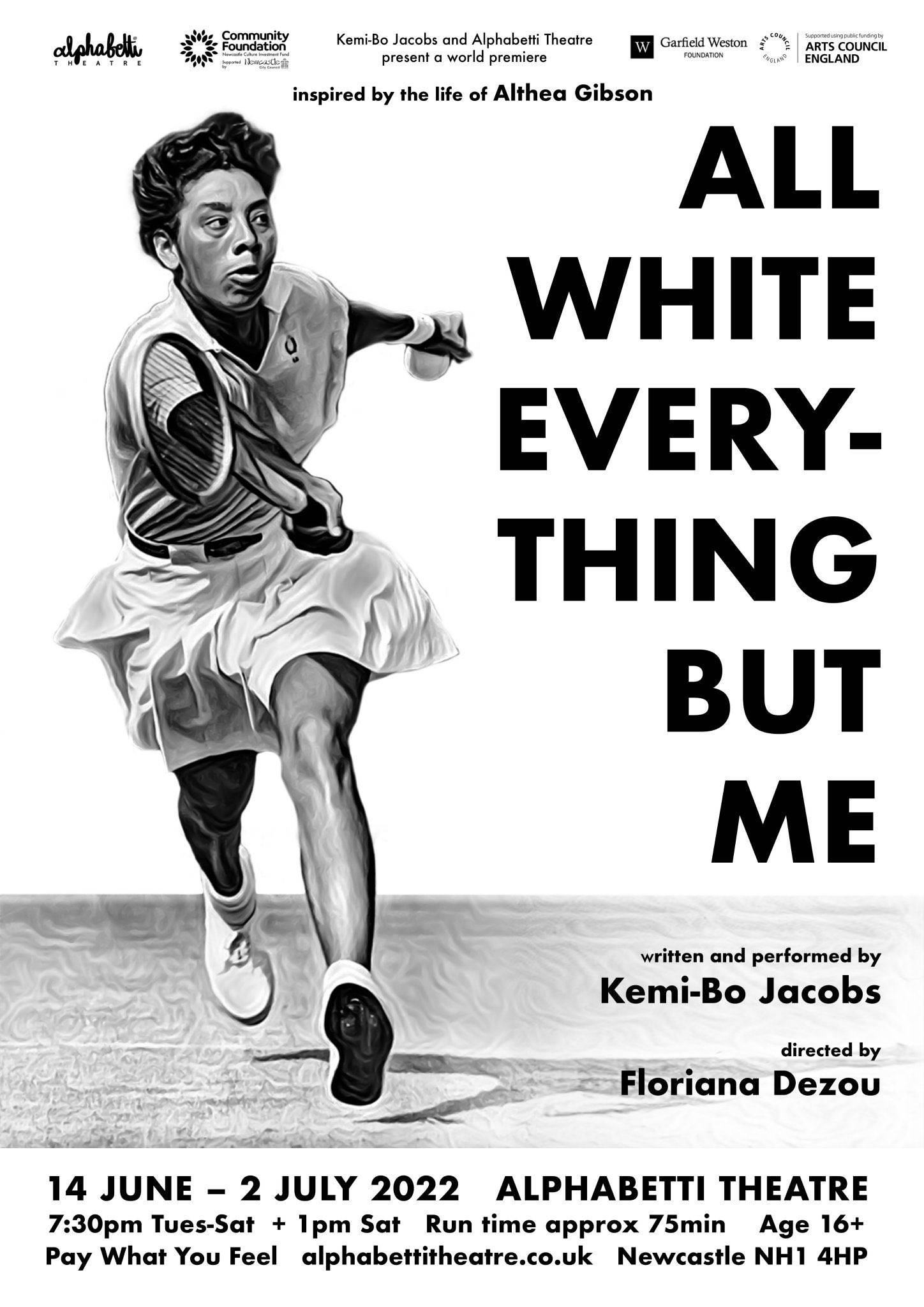 Kemi-Bo Jacobs and Alphabetti Theatre are co-producing the World Premiere of All White Everything But Me by Kemi-Bo Jacobs.

“We are all born equal but into inequality, someone maybe said that once or maybe never ’til now.”

All White Everything But Me is a one-person play inspired by the life of Althea Gibson. In the 1950s she made history by becoming the first ever black female tennis grand slam winner, overcoming huge racial barriers, winning Wimbledon twice. Upon retiring from tennis, she then went onto to become a professional golfer and actor in Hollywood.

Who decides who is important enough to be immortalised in history? Why is Althea Gibson part of a forgotten history?

About Kemi-Bo Jacobs:
Kemi-Bo Jacobs is a female, North East-based actor who has featured on BBC, ITV and Netflix to name but a few. Most recently she was part of the RSC company’s production of The Winter’s Tale.

In 2021, she directed Olivia Hannah’s debut production, Braids at Live Theatre, Newcastle & in the same year she was also the recipient of the New Writing North & Channel 4 Screenwriting Award.

Her relationship with Alphabetti Theatre started in May 2018, where she had a week long residency through the North East Artist Development Network. From this residency a relationship has flourished with her performing at a Write Faster event in 2019 and being part of Alphabetti’s online programme in 2021, featuring in Roots Food by By Jaz Craddock-Jones, directed by Tricia Wey (mentored by Chris Sonnex), Performing alongside Cleo Sylvestre.

Praise for previous work:
“As Hermione, Kemi-Bo Jacobs started out as a beguiling figure in entertaining, cocktail- party mode, then found something truly affecting as she let her husband know the damage he was wreaking. She’s one to watch.” (Dominic Maxwell, The Times on The Winter’s Tale, 2021)

Booking Essential. Tickets are Pay What You Feel and are available from www.alphabettitheatre.co.uk