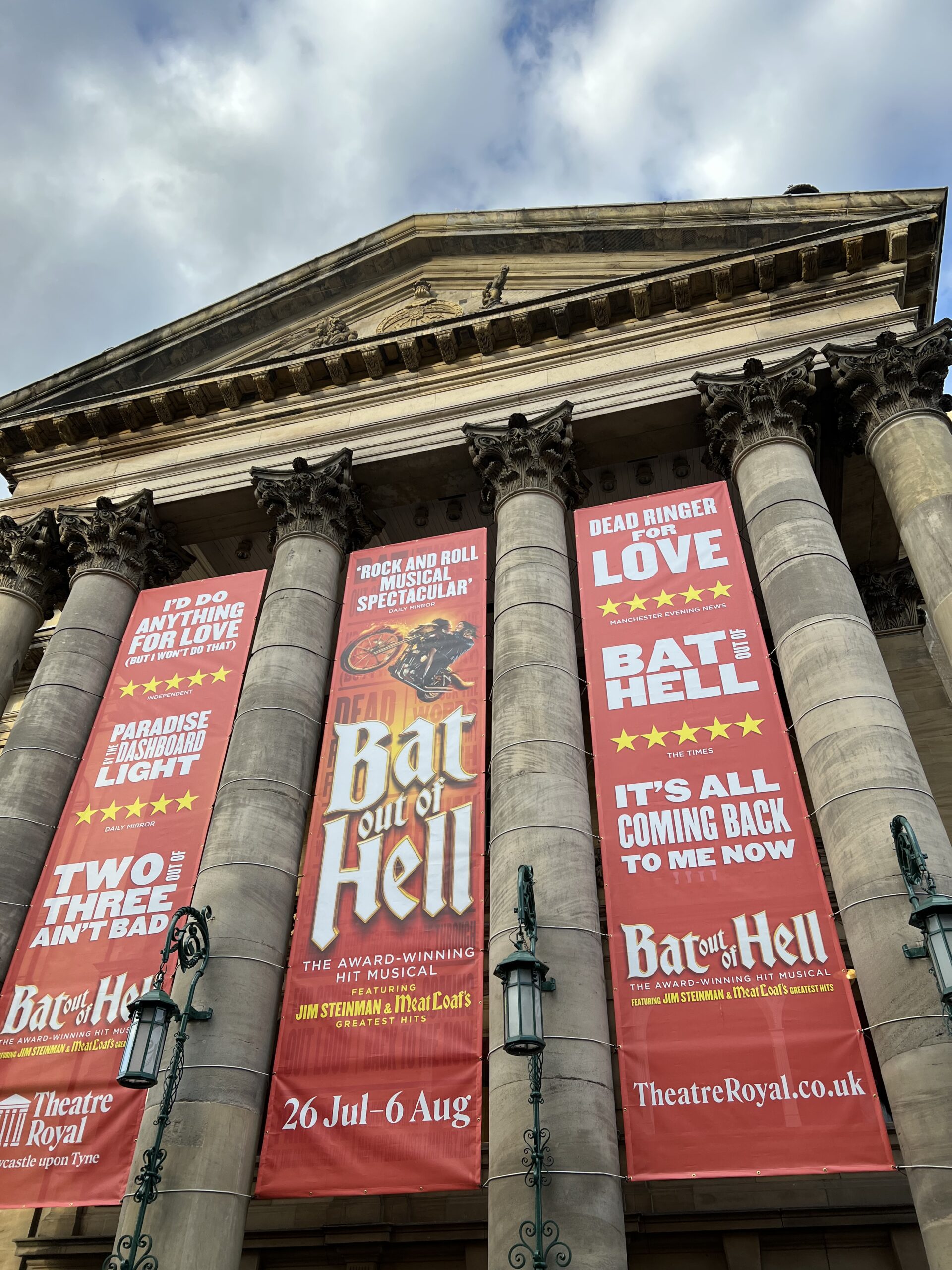 Jim Steinmann’s Bat Out Of Hell arrived in Newcastle for a two week run at the Newcastle Theatre Royal last night and is here until Saturday 6 Aug 2022.

Introduced pre show by our local Harley Owners Group; The Geordie Chapter, we got to see a selection of beautiful motorbikes on the theatre concourse and the roar of their engines as they performed a ride around. This was a nice way to bring the Rock’N’Roll to Newcastle.

So the storyline. Yes it is essentially a forbidden love story. Strat is a genetically changed 18-year-old who like his friends make up the group known as the ‘The Lost’ who cannot age. Raven is the heiress to Falco, ruler of Obsidian the futuristic and dystopian city and this young lady has been shielded all her life. She has been hidden away from the world outside due to the fact these rebels in the city are against her father Falco and want change. Strat who as the leader of ‘The Lost’ portrays everything she wishes for, freedom and the ability to express herself as she sees fit. Likewise, Strat see’s a beauty in Raven and wishes to take her out of the bubble she is in.

In all honesty the story isn’t the strongest I’ve seen but this show is all about the soundtrack and paired with performances and staging is a great production overall.

The staging and set design were absolutely fantastic. We had Raven’s bedroom situated on a 1st floor upper level, which was complimented by a large video screen, projecting live film throughout scenes. This enhanced the atmosphere and for me gave it a concert feel. I particularly enjoyed the videography which was brilliant when projecting characters from the live action on stage to the screen and a slow-motion bicycle crash to end the first interval.

Ravens parents Falco and Sloane played by Rob Fowler and Laura Johnson (who stepped up for tonight) were a great pairing. Fowler well versed in the role as he previously played it in London also. A feuding couple with a love/hate relationship but both protective parents were very enjoyable to watch and I hugely enjoyed one of their standout moments in ‘Paradise by the Dashboard Light’.

Glenn Adamson’s portrayal of Strat was the standout performance for me. Brilliant as this boy in love. If a person was to look like Rock’N’Roll, then Adamson is that. Also giving me Jagger-esque vibes it was just a joy to watch his emotion, performance and energy throughout. Martha Kirby as Raven was a close equal, and impressed with her moment with ‘It’s All Coming Back To Me Now‘.

The supporting cast of The Lost Boys were enjoyable to watch. All playing their part with James Chisholm and Joelle Moses, another couple in the show performing some great songs too.

All in all, if you want entertaining and the feeling of a great night out then this is for you. This is a highly energetic, loud and entertaining production, with some great performances and classic songs. I would do anything for love, and this is a show I love!