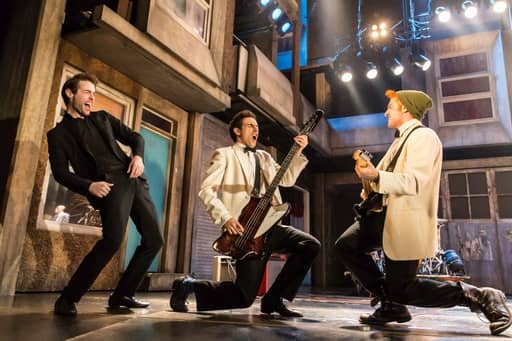 Following a sell-out run in 2017, the world’s hardest working and most explosive soul band – The Commitments – are set to burst back onto the Newcastle Theatre Royal stage (Mon 26 Jun – Sat 1 Jul 2023) as part of a much anticipated nationwide tour.

The smash-hit musical based on Roddy Doyle’s best-selling novel will star Coronation Street legend Nigel Pivaro, who appeared in the hugely popular ITV soap between 1983 – 2012 as the lovable rogue Terry Duckworth and is swapping the cobbles for the stage and performing the role of ‘Da’.

Nigel Pivaro says: “I am thrilled to be marking my return to the stage in this production of The Commitments. It’s an iconic story that resonates across the years, about people who though distant from the music’s origins find communion and expression in the Motown style. A musical genre which was borne out of oppression and which the characters embrace as their own. The Motown Sound is as vibrant today as it was when it first burst through in the Sixties.”

The Commitments is directed by Andrew Linnie who made his West End debut in the original production in 2013, playing the role of Dean, the band’s sax player. He then went on to star in the lead role of Jimmy Rabitte in the 2016/2017 UK tour.

Joining the cast as Deco is Olivier Award nominee Ian McIntosh. Ian is no stranger to this role, having previously played Alternate Deco during the original West End run. Previous credits include Galileo in the UK tour of We Will Rock You, Sid Worley in An Officer and a Gentleman and he was Olivier nominated for ‘Best Supporting Actor in a Musical’ for his role as Barry in Beautiful – The Carole King Musical. His extensive musical career has also seen him perform in Hair and Can’t Buy Me Love.

In 2013 The Commitments musical opened in London’s West End to universal critical acclaim and enjoyed a record-breaking two-year residency at the Palace Theatre. After which, it hit the road for a major tour, invigorating audiences up and down the country throughout 2016 and 2017.

The Commitments musical has been adapted from the novel by Booker prize-winning author Roddy Doyle. Featuring an electric playlist, The Commitmentsshowcases more than 20 soul classics performed live on stage, including Night Train, Try A Little Tenderness, River Deep, Mountain High, In The Midnight Hour, Papa Was A Rolling Stone, Save Me, Mustang Sally, I Heard It Through The Grapevine, Thin Line Between Love and Hate, Reach Out, Uptight, Knock On Wood, I Can’t Turn You Loose and many more!

The Commitments plays at Newcastle Theatre Royal from Mon 26 Jun – Sat 1 Jul 2023. Tickets are priced from £20.00 and can be purchased at www.theatreroyal.co.uk or from the Theatre Royal Box Office on