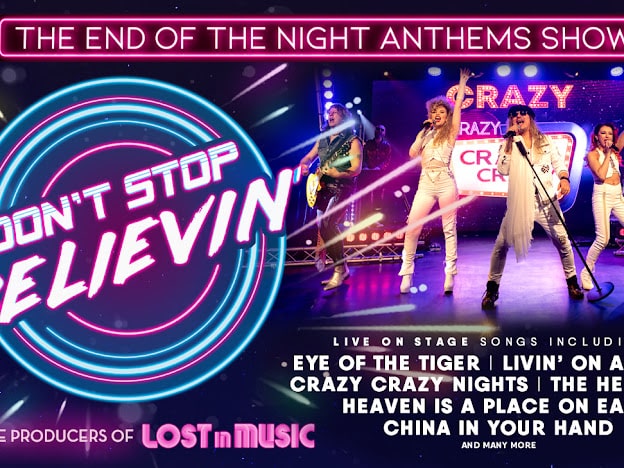 This month, celebrating the 40th anniversary of the biggest hit single of the Eighties – Eye of the Tiger – the brand-new stage show Don’t Stop Believin’ roars into town.

Created by Entertainers – the same company that has entertained more than 20 million UK theatregoers in the past 17 years with shows like Lost in Music, Fastlove, The Rocket Man, The Magic of Motown, Radio Gaga and Thank You for the Music – this time the production team celebrates “end-of-night anthems”.

Songs featured include Summer of ’69, I Love Rock ‘n’ Roll, Livin’ on a Prayer, Sweet Child O’ Mine, China in Your Hand, You Shook Me All Night Long, Sweet Home Alabama and many more – with a special place reserved for Survivor’s platinum-selling Eye of the Tiger.

Released on May 31, 1982, the song was the theme tune to the Rocky III film, and went straight to number one in the UK charts. Specially written for the film, it was written and recorded at the request of the film’s star and director Sylvester Stallone, after being denied use of Queen’s Another One Bites the Dust on the film.

“Like all songs featured in Don’t Stop Believin’, Eye of the Tiger has stood the test of time,” says James, “and is just one of 30 of the massive anthems featured. The set list bristles with songs we’ve all partied to at the end of unforgettable party nights out in the past.

“Production values are key, with each hit brought to life in full colour with a sizzling cast, fantastic costumes, and amazing light show.

The end-of-night-anthems show is now touring the nation and advises theatre fans that love to party to “hold on to the feeling and Don’t Stop Believin’”.