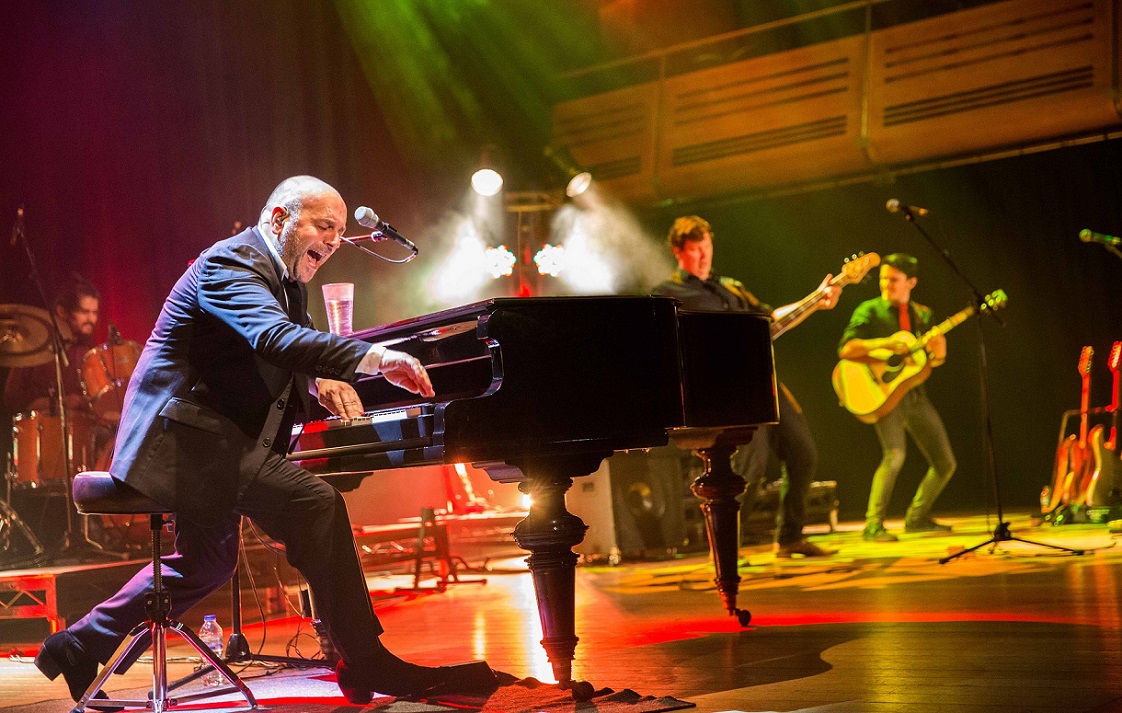 ‘It’s an honour to be that guy at the piano, playing these songs’

“I’ve been performing some of these songs for 30 years… And I’d play them for another 30 too,” says Elio Pace about the back catalogue of his musical idol Billy Joel.

Elio was just a teenager when he ‘tripped over’ Billy Joel’s music and began a life-long crusade to showcase the songs to audiences across the UK and beyond.

And this autumn he returns to the road, taking The Billy Joel Songbook out on tour to bigger venues than ever before.

“I was 16 or 17 at sixth form college in Hampshire, where I grew up, when I fell in love with Billy Joel’s music,” he said. “I was already music mad, already gigging, even at that age – in fact from 14 or 15 I was playing with bands in clubs.

“Then, when Billy came along it was like a light went on for me; the way he influenced my singing, writing, performance, piano playing – it was instant. Everything changed. And right from then, I envisaged, one day, singing my favourite Billy Joel songs on stage.”

Elio’s journey to The Billy Joel Songbook began as far back as 1993, when he approached a contact in the entertainment industry, and suggested putting something together.

“I pitched the whole show concept,” Elio explains. “I had a poster, everything, and called it Piano Man.

“He looked through it and said he could see my passion, that it was a brilliant idea, but there was one big problem; Billy Joel was still doing it. He said I was 20 years too early.

“And 20 years later, almost to the month, in 2013, I started booking shows for The Billy Joel Songbook.”

Since then the show has built up a loyal following across the country, from initial audiences of a few dozen people, to 1,400-plus for the 2021 tour.

“It has been an interesting and educational journey as I thought Billy Joel’s music would sell out as easily as saying ‘There’s a Billy Joel show in town’, because there had never been one in Britain,” Elio said.

“But we had an amazing band, who were artists in their own right, and even when we were playing in front of 35 people, I knew those people would have a great time, and would come back next time and bring their friends.

“Billy Joel is, from the very bottom of my heart, the greatest singer/songwriter of all time. So, I’m flattered and honoured that it’s me who gets to do the show. It’s an honour and privilege to be the guy behind the piano, singing these songs.”

A successful musician in his own right, Elio had been working in musical theatre and on the corporate circuit for years before turning his attentions to The Billy Joel Songbook.

But his big break came back in 2010 when the late Sir Terry Wogan picked up on his work, and insisted Elio front the house band for his Weekend Wogan show on BBC Radio 2 – which saw them perform live arrangements for the weekly special guests.

“We did 35 live shows, with three live performances on each – writing the arrangements for the incredible artists who appeared, people like Brian May, John Legend, Debbie Reynolds. But I was also a featured artist in my own right and,apparently, I’m a record holder for the most live performances on radio in one year.

“Wogan was a great champion for me as a musician and also opened doors for me as a singer/songwriter. I will always be grateful for that.”

With hits like Piano Man, We Didn’t Start The Fire, She’s Always A Woman and Tell Her About It, Billy Joel’s back catalogue is a great resource for any musician. But witharound 120 songs at his disposal, how did Elio shape the show?

“The Billy Joel song book is ridiculously awesome, and I want to keep introducing people to it – there’s loads of songs there that you just don’t hear, yet they’re incredible,” he explained.

“A great friend of mine, Matt Daniel-Baker – an amazing mind reader, is another massive Billy Joel fan, and I said to him I was putting a show together, and could he help me.

“We paced back and forth listening to every song, for hours, days, weeks, going on long car or train journeys, just to be able to get away from everything else and focus on the music. And from that, we fashioned a set list.

“We went through every single song, looking for the opening number, the closing, first act close, every moment of the show.

“We wrote that set list in 2014, and it’s not changed since. We moved Uptown Girl, and made one other change early on, but nothing else since. There’s one moment in the second half which allows for a change, but in the whole structure, nothing is different from those first shows.”

And while all the big hits feature, there’s an album track which plucks at Elio’s heartstrings far more than any of the chart-toppers.

“From start, to finish, the whole two-hour show, I can’t tell you how much I love performing it and performing all those incredible songs.

“It comes from Billy’s very last album River Of Dreams in 1993 – but it wasn’t until 2009 that it really took the place in my heart, when my daughter Marcella was born.

“When I became a father to her, and then listened that song again I couldn’t breathe. Billy Joel wrote it to his daughter when he was splitting up from her mother, to tell her he wasn’t going far.

“Until that time, I liked the song musically, I appreciated it for what it was, but as soon as I felt that love as a father… That song took on a whole new meaning. It floored me.

“In the show, it’s the calm before the storm – it’s the last song before we go into the final 20 minutes when it’s hit after hit, after hit to send everyone out on a party high.”

As a true musician, Elio’s emphasis with The Billy Joel Songbook is always first and foremost the music – and it’s from this point that he has such great respect for Billy Joel.

“I always tell people, and it’s really important to me, I am not a Billy Joel tribute artist – I’m not out there on stage with a goatee or black glasses,” he said. “I’m out there as me, paying tribute to the music, and celebrating the music and the musician.

“I’m there telling you how much I love this songbook of music, reminding you how much of the music you also love but may have forgotten – or never even realised – that it was Billy Joel’s work. Songs like She’s Always A Women, Just The Way You Are, Tell her About It… They are classic Billy Joel songs, but you forget that.

“I just have this absolute bee in my bonnet about getting this under-rated genius out there to get the credit he should, and that’s why we do this.”