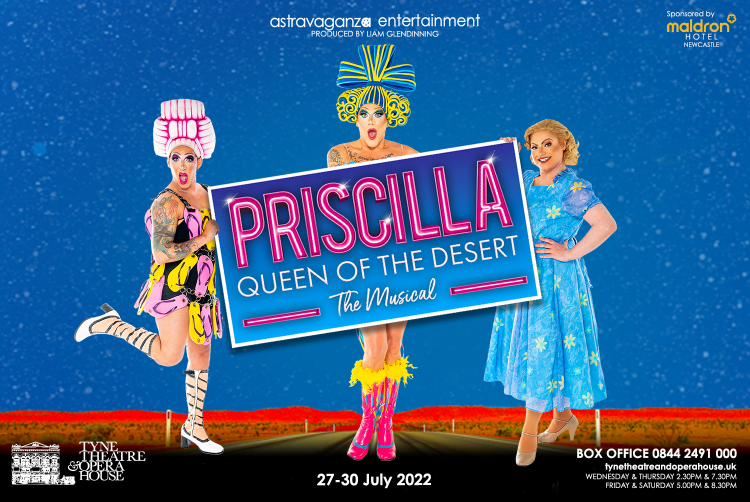 Priscilla Queen of the Desert the Musical is currently showing for a limited run at the Tyne Theatre & Opera House until Saturday 30th July 2022.

Brought to us by Astravaganza Entertainment, a theatrical production company based in Country Durham who stage a variety of theatrical genres. They help bridge the gap between amateur and professional work and encourage and promote local talent. Their previous productions, including The Little Shop of Horrors, Grease, and Shrek the Musical.

They returned this year with the production of Priscilla Queen Of The Dessert, of which they last staged in 2017.

Based on the smash-hit 1994 movie, the show is about three drag queens who journey out of Sydney and across the desert so that Tick can keep his promise and meet his six-year-old son for the first time, he also worries for the response he’ll receive when his son finds out about his fathers choice of career. This journey is undertaken in an old bus they name Priscilla.

What you have to love most about this musical is the songs, and there are plenty to have you humming or singing along too. You’ll here classics such as I Will Survive, Hot Stuff, Finally, Boogie Wonderland, Go West, Girls Just Wanna Have Fun, and I Love The Nightlife and a wonderful rendition of Pop Music too!

The production is full of colour, sequins, feathers and outrageous costumes as you may expect. They even manage to get a moving bus on the stage which rotates according to the scene.

This show only works if all three leads have chemistry and with that, I can testify they certainly did. While each has a very contrasting personality you can see the underlying friendship and loyalty to each other.

Matt Charlton was our modern, outwardly camp and kylie loving Felicia. Someone who lives for the moment, and maybe doesn’t think about the consequences of their actions until it’s too late. His performance gave an outward confidence with a vulnerability that lay underneath.

We then have Tick, my favourite of the three personally, played by David Ducasse. I enjoyed his display of caution, eagerness and will to be a father while worrying about how he would be portrayed. He was the glue that kept this band together on their travels.

Bernadette was the old head of the three and with life comes experience. Older and wiser but alone, just seeking companionship. Keith Wigham does a wonderful job of bringing this across and showed although she may be old, she certainly wasn’t out of the game.

There were some moments where the accents dropped, however it didn’t really affect my enjoyment as the performance overrode it.

The musical interludes between the scenes kept us entertained and took our focus off the transition of the set. The Divas of Nicola Hewett, Backy Lakin and Jessica Treacy were brilliant and I loved their voices. I really enjoyed the immersive feeling when the stalls seating was flanked by dancers and the royal box was filled with two of the accompanying divas too. It helped bring the show that bit closer.

If you like a little audience participation then be ready during the interval to volunteer as you could be on stage for a scene at the start of the second half if you’re lucky.

This is an enjoyable musical and you’ll no doubt come out with a smile on your face after two hours of classic songs, humour and your fair share of sequins. It’s a classic uplifting and heart warming musical, so grab your feather bower and head to the Tyne Theatre for the remaining shows.