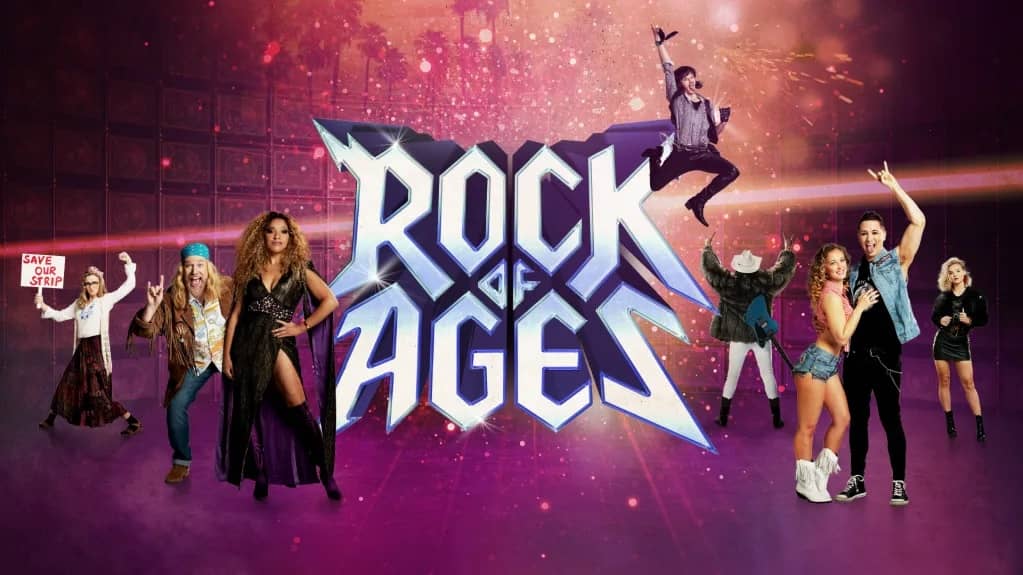 The producers of ROCK OF AGES are thrilled to announce full casting and new dates for the UK and Ireland tour, including the return of Coronation Street star KEVIN KENNEDY as ‘Dennis Dupree’, a role he previously played to huge acclaim in 2018.

Kevin Kennedy is best known for his portrayal of ‘Curly Watts’ in “Coronation Street”. His West End theatre credits include ‘Amos’ in “Chicago” at the Adelphi Theatre and “We Will Rock You” at the Dominion Theatre. Kevin has played both ‘Caractacus Potts’ and ‘The Child Catcher’ in the hit musical “Chitty Chitty Bang Bang”, becoming the first actor to have played both roles. He appeared as ‘Dennis Dupree’ in the 2018 UK Tour of “Rock of Ages” and has also appeared in the national tours of the musicals “The Rocky Horror Show”, “The Commitments” and Kay Mellor’s “Fat Friends”.

Sam Turrell returns to “Rock of Ages” and the role of ‘Drew’ having performed the show around the world on the NCL Breakaway cruise ship.

Gabriella Williams theatre credits include ‘Sophie’ in “Mamma Mia!” at the Novello Theatre, “Eugenius!” at the London Palladium, “Carrie The Musical” at the Southwark Playhouse and “Miss Saigon” and “Grease”, both on a UK tour.

Joe Gash’s theatrical credits include entertainment for P&O Cruises Australia and ‘Kenickie’ in “Grease” for Royal Caribbean’s Harmony of the Seas. Most recently Joe appeared as ‘Freddie Mercury’ on ITV1’s new show “Starstruck”.

“ROCK OF AGES” is the hilarious musical comedy lavished with over 25 classic rock anthems, including, ‘We Built This City’, ‘The Final Countdown’, ‘Wanted Dead or Alive’, ‘Here I Go Again’, ‘Can’t Fight This Feeling’ and ‘I Want To Know What Love Is’, played loudand proud by an awesome live band. Leave it all behind and lose yourself in a city and a time where the dreams are as big as the hair,and yes, they can come true!

Now a global smash with hit seasons on Broadway, London’s West End and Las Vegas and a star-studded Hollywood movie version this show promises you the best party night out around.

“ROCK OF AGES” has a book by Chris D’Arienzo and arrangements and orchestrations by Ethan Popp.

The full creative team includes Nick Winston  (Director of the feature film “Tomorrow Morning”, “MAME”, “The Royal Variety Performance”) who Directs and Choreographs the show, Set and Costume design by Morgan Large (“The Woman in White”, “Joseph and the Technicolour Dreamcoat” and “Tell Me On A Sunday”), Lighting Design by Ben Cracknell (“Sunset Boulevard”, “Pantoland at the Palladium”, “Priscilla Queen of the Desert”), Sound Design by Ben Harrison (“Mame”, “Priscilla Queen of the Desert” and “Fame”) and Video and Projection design by  Duncan McLean (“The Car Man, Nutcracker! and Magic Goes Wrong”). Casting Director is Jim Arnold CDG, Associate Director is Victoria Gimby, Associate Choreographer is Ryan-Lee Seager and Associate Lighting Designer is Chris Vaughan. Costume Supervision by Lee Tassie and Production Management by Phil McCandlish.

Rock Of Ages will hit Sunderland Empire’s stage from Tuesday 6 September – Saturday 10 September 2022. Tickets priced from just £13* are available from the Ticket Centre on 0844 871 7615* or online at www.ATGtickets.com/sunderland*