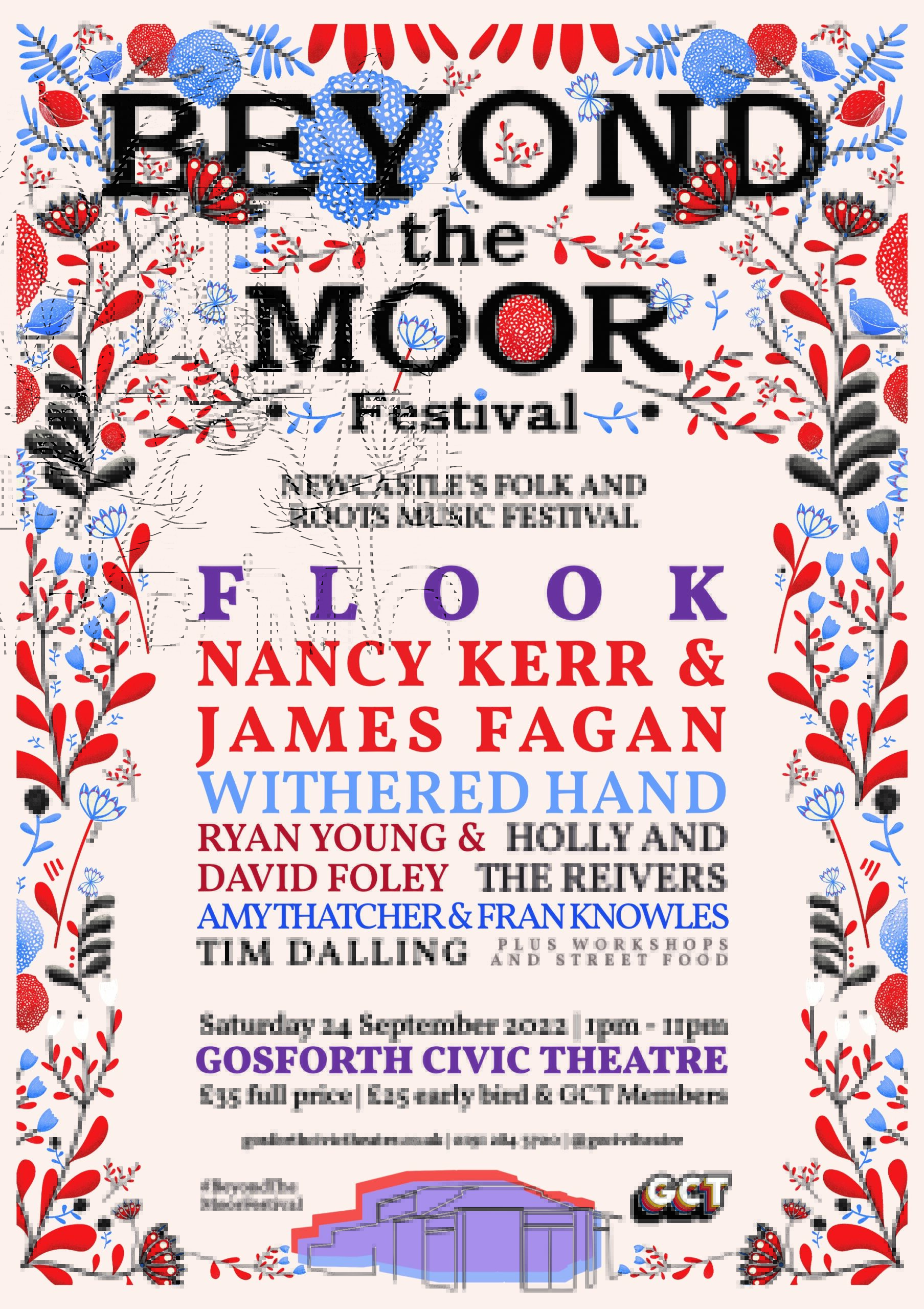 Beyond the Moor is Newcastle’s latest music festival. The inaugural day-long event takes place at Gosforth Civic Theatre on 24 September 2022 and will showcase the best in local and national artists playing contemporary, alternative and traditional folk and roots music.

Headlining the first ever edition of the Festival will be RTE Radio 1 and BBC Radio 2 Folk award nominees FLOOK. Taking inspiration from their roots in the Irish and English traditions, Flook have an enviable trademark sound, weaving and spinning traditionally rooted tunes over precise acoustic grooves, with a rare blend of fiery technical brilliance, delicate ensemble interaction and a bold, adventurous musical imagination.

They are paired at the top of the bill by NANCY KERR AND JAMES FAGAN, one of the best-known and most experienced folk duos on the British circuit today. Outstanding musicianship, a lifelong grounding in traditional singing and instrumental playing, acclaimed original compositions but most noticeably a visceral chemistry between these two make Kerr and Fagan a perennial favourite at festivals, venues and clubs across the country.

The wonderful lyricism and gorgeous melodies of WITHERED HAND will also adorn the GCT stage. Described by King Creosote in The Independent as “The UK’s Best Lyricist”, Withered Hand is the song writing output of Dan Willson, a cult figure in the Scottish music scene since 2009.

North East based trio HOLLY AND THE REIVERS return to GCT from a hugely popular gig in January ’22 to showcase their growing reputation as one of the most exciting folk and trad bands to come out of the North East scene in years. Bertie Armstrong, Merle Harbron and Holly Clarke create a musical setting for their songs by combining the musical styles of old-time banjo, Scottish fiddle and the Ballad singing.

Fans of instrumental virtuosity should be excited to see RYAN YOUNG on the bill. Part of the ‘new wave’ of Scottish traditional artists, twice a finalist in the BBC Radio 2 Young Folk Awards, and twice a finalist in the prestigious BBC Radio Scotland Young Traditional Musician of The Year Ryan’s fiddle playing is brimming with fresh melodic ideas, an uplifting rhythmic drive and a great depth of dynamics and precision. He’s joined on stage by multi- instrumentalist and member of RURA and Väldens Band, DAVID FOLEY.

Completing the line-up are two North East based artists: brand new accordion and percussion duo from Newcastle, AMY THATCHER AND FRANCESCA KNOWLES’ live show is one of both raucous energy and sympathetic intensity, incorporating drums, synths, keys and vocals into an unapologetic brew of colourful and creative composition.

While TIM DALLING uses his funky piano accordion to accompany songs of poetry, love, animals and drink. Tim was the former kilted fall guy in comedy folk trio The Old Rope String Band and he is still right there at the cutting edge of 21st century Music Hall. He was recently described as a cross between Led Zeppelin and Ivor Cutler.

The seven strong line up will begin from 1pm and continue to 11pm and will be accompanied by street food outside and GCT’s bar serving all day to keep ticket buyers refreshed throughout. Tim Dalling will also be doing a two-hour WORKSHOP of writing exercises and singing games aimed at freeing yourself up and exploring various ways of generating song ideas. It will be open to all but ticketed separately.

Newcastle and the North East’s folk scene is strong and vibrant and Beyond the Moor seeks to harness this by pairing it with genuine world class touring bands. Gosforth Civic Theatre’s folk club gigs have seen an increase in popularity and there’s a tangible thirst for more platforms for contemporary folk and roots music in the region.

Kari Macleod and Bernard Wright, who have led on the Beyond the Moor programme, said: “We were conscious that there’s a highly regarded folk and traditional music degree in Newcastle but there is currently no festival of this kind happening in the city right now. We wanted to create an opportunity for people to see some of the best and most exciting artists, both regionally and nationally, under one roof as a celebration all forms of traditional and roots music; with the hope to inspire the next generation of musicians and audiences.”

Beyond the Moor Festival is on Saturday 24 September 2022 with live music beginning from 1pm at Gosforth Civic Theatre. Tickets go on sale at 12pm on Friday 8 July 2022 via gosforthcivictheatre.co.uk/beyond-the-moor, at the venue and Eventbrite.