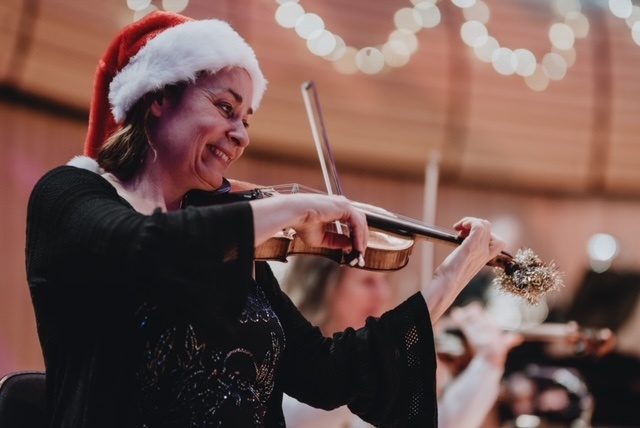 Sage Gateshead is here for seasonal favourites, festive nights out and family fun for audiences, artists and the North.

Sage Gateshead has the seasonal sparkle to make your Christmas extra special this year.

Sage Gateshead announces 1,000 tickets at £5 and £2.50 for people in the North East who want to come to Sage Gateshead for the first time this Christmas.

From evenings packed with West End classics to The Messiah and favourites like Kate Rusby and The Sixteen, Sage Gateshead has a huge range of warming winter treats to make Christmas extra special this year.

Kate Rusby brings her humour and storytelling to Kate Rusby at Christmas on Thursday 9 December, inviting us into Sage One to share the traditional Yorkshire carols of her youth sung in Yorkshire pubs each Sunday lunchtime through November and December.

Christmas isn’t complete for some without the magical sound of The Sixteen. In their Christmas special on Friday 10 December their festive programme centres around Bob Chilcott’s evocative and atmospheric double-choir O antiphons and two stunning settings of the Conditor – the hymn for advent – by Victoria and Guerrero, as well as a mix of traditional carols and festive favourites.

The glamour of the West End comes to the North East this Christmas, with an evening of the biggest musical theatre hits in RNS: A West End Christmas on Saturday 11 December. Alfonso Casado Trigo conducts Royal Northern Sinfonia and a cast of huge West End and Broadway stars including Kelly Mathieson, Caroline Sheen, Nadim Naaman and Scott Davies. Expect favourites from the likes of Phantom of the Opera, Chicago, Mary Poppins and more… plus some festive showtunes!

Have a great night out at Sage Gateshead’s Curious Winter Cabaret with a double bill of performances by highly acclaimed musician Beccy Owen and Birmingham’s ‘queen of disco’, Fatt Butcher on Thursday 16 December.

Songs and festive cheer from the North country for a bright new Winter’s day! Jez Lowe’s annual Christmas tour has become quite a tradition in recent years, striking out from his native North East England to entertain audiences across the whole of the UK. Award-winning songwriter Jez Lowe will be joined by his intrepid touring band The Bad Pennies at Sage Gateshead on Friday 17 December, so expect a musical feast of guitar, cittern, fretless bass, fiddle, melodeon, piano, whistles and their trademark harmony vocals!

It wouldn’t be Christmas without Handel’s Messiah, now established as part of our Christmas traditions. This year Huddersfield Choral Society join Royal Northern Sinfonia in Sage One on Saturday 18 December to sing it. Young Sinfonia will take to the stage of Sage One too that evening to give audiences a pre-concert treat.

A seasonal favourite, A Jazzy Christmas – Paul Edis and Friends returns to Sage Gateshead on Wednesday 22 December. Featuring new arrangements of festive favourites penned by ‘brilliant young pianist’ Paul Edis and performed by some of the leading lights on the UK jazz scene.

Christmas would not be complete until you’ve been to Sage Gateshead and let yourself be whisked off into the cold, starry night by The Snowman. This enchanting screening of the family favourite film, narrated by music leader Eleanor Mooney, is accompanied live by Royal Northern Sinfonia and runs from Wednesday 22 to Friday 24 December.

Finishing off the seasonal celebrations is the Royal Northern Sinfonia’s New Year’s Day Concert. Conducted by Alexandre Bloch, bring in 2022 with waltzes and polkas by the Strauss family in the Viennese tradition.

Sage Gateshead is also here for those that like to get involved and hands on; there are various opportunities to make music at Sage Gateshead this Christmas from a short course in Christmas Choir Singing starting on 12 November, to Sing the Hallelujah Chorus, Uke Rock Christmas Edition, Sing Abba’s Greatest Hits, or a day long workshop on Fiddles at Christmas.

In what has been a challenging 18 months for so many, the organisation wants to ensure everyone can join in with a Sage Gateshead Christmas. To help, Sage Gateshead will offer 1,000 £5 and £2.50 tickets across the Christmas season, to North East audiences coming to the venue for the first time. The charity hopes this offer will be particularly helpful to those who might otherwise be unable to afford tickets. The first tickets made available are for Royal Northern Sinfonia concerts in December, which can be purchased by phoning the Box Office on 0191 443 4661.

Abigail Pogson, Managing Director of Sage Gateshead, said: “Many people feel like they missed out on the Christmas they longed for last year. This year we want to make sure that Sage Gateshead not only offers a wonderful range of Christmas concerts and activities to make it an extra special time, but also makes that affordable and accessible to as many as possible which is why we’ve made 1000 £5 and £2.50 tickets available for new audiences. We really hope that in looking to make this an extra special Christmas, some people will discover a night out at Sage Gateshead for the first time.”

All this also takes place to the backdrop of an ongoing financial challenge for the organisation. Due to the Covid-19 crisis, the venue has largely been closed since March 2020, with 80% of its income affected. This year, its income is set to be half of that in a pre-Covid year. Alongside the support of the Culture Recovery Fund from Arts Council England and DCMS, the charity again needs to raise £1m this year and £1m next year to secure its future, rebuild live music in the region and ensure music is part of everybody’s recovery.