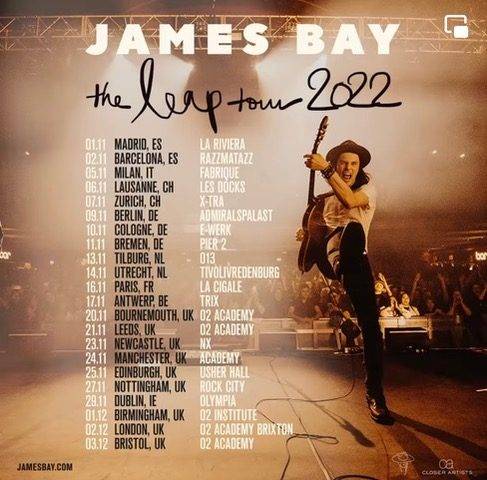 Kicking off in Bournemouth on the 20th November, the ten-date tour sees him playing venues across the UK including Manchester, Leeds, Birmingham, Edinburgh, Dublin, London’s Brixton Academy and culminating at Bristol’s O2 Academy.

The announcement follows Bay’s recent sold-out UK tour in April, his first with a full band in three years which received rave reviews including Gigwise who stated, “If anyone ever doubted James Bay’s rockstar status, this would be the show to prove them wrong.” Back in late January, James embarked on a highly successful run of dates across the UK’s grassroots venues in celebration of Independent Venue Week, which gave fans the unique experience of seeing him perform alone with his guitar in an intimate setting. This summer, Bay will play a number of UK festivals before heading out to the US to join The Lumineers on their 2022 Brightside World Tour.

Bay also shares the beautiful music video for his new single ‘One Life’. The track was teased across socials, describing the track James said, “This is a song I wrote about me and Lucy. We first got together at 16 and have been together ever since. She’s supported me since day one. From open mic nights, right through to my biggest shows. It’s been one adventure after another, but now we’re on the biggest one of all.  Raising our beautiful daughter Ada.” The moving visuals for the video chart a relationship between a couple, while milestone memories are captured in a way that resembles a very personal and intimate home movie.

James Bay will release his highly anticipated third full-length album, Leap, on July 8 via EMI Records/Republic Records. Leap is an open-hearted and hopeful collection of songs dedicated to the people closest to him, and finds Bay taking bold creative risks, pushing emotional boundaries, and embracing the unknown.

To bring the album to life, Bay worked with some of the industry’s most renowned producers and songwriters in a mixture of in person and remote sessions in Nashville (at the infamous RCA studio A) & London, including Finneas [Billie Eilish, The Knocks], Dave Cobb [Brandi Carlile, Chris Stapleton, Lady Gaga], Ian Fitchuk  [Kacey Musgraves, Brett Eldredge], Foy Vance [Ed Sheeran], and Joel Little [Lorde, Taylor Swift].