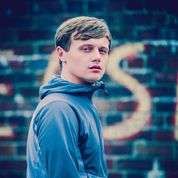 Jamie Webster records an exclusive cover track from Sam Fender ‘Leave Fast’ for us at InNewcastle.co.uk

Chilled by the national lockdown with his profound love of performing live temporarily set on ice, the people-powered, Liverpool-born and bred artist starts the countdown to his long-awaited, debut album by announcing that he will play Newcastle’s  Think Tank? on Fri 4 September 2020.

In advance of this visit, Jamie took time out to record an exclusive cover track for us here at InNewcastle.co.uk. Pulling this one from local lad Sam Fenders back catalogue, he chose to sing a wonderful version of ‘Leave Fast’. After getting to listen to it, we certainly think Mr Fender would be a big fan of this cover for sure. If you’re reading this Sam, let us know! Here it is below.

Determinedly striking out to claim his ground as a songwriter in the vein of his own heroes. Unashamedly referencing The La’s, Shack and Noel Gallagher amongst a long line of musical heroes, at the heart of Webster’s songwriting lies faith that a better life is out there somewhere, beyond lunch-hour daydreams and payday blow outs.

Taking about his return to the city, Jamie says: “Rafa Benitez, Kevin Keegan, Terry McDermott… there are so many links between my home city of Liverpool and Newcastle and our two famous football teams, it’s unbelievable really. I can’t wait to get there later this year. The people in our two cities are a people apart, we’re not the same, but that’s also what unites us, there’s nobody else like the Scousers or the Geordies. We like a good time too, the nightlife is incredible in Newcastle, so I am expecting a lively one.”

Listed by the Liverpool Echo journalists as the 11th most influential person shaping the city’s modern culture in their 2020 Power List, Webster’s sights are now trained on the rest of the UK and beyond.

Webster’s spirited live shows develop an electric, festival-like atmosphere with an energetic camaraderie between performer and audience crackling at close quarters. With more dates to be announced, all upcoming shows including his album tour and summer festival dates are as follows:

Remaining tickets for Newcastle all forthcoming shows are available at See Tickets.

Grinding The Gears is Jamie’s third single with Modern Sky and follows iTunes Chart-topping tracks, Weekend In Paradise and Living For Yesterday. Each have supercharged the 26-year old ex-electrician’s popularity, with lyrics rooted in Webster’s own working-class upbringing and personal experiences.