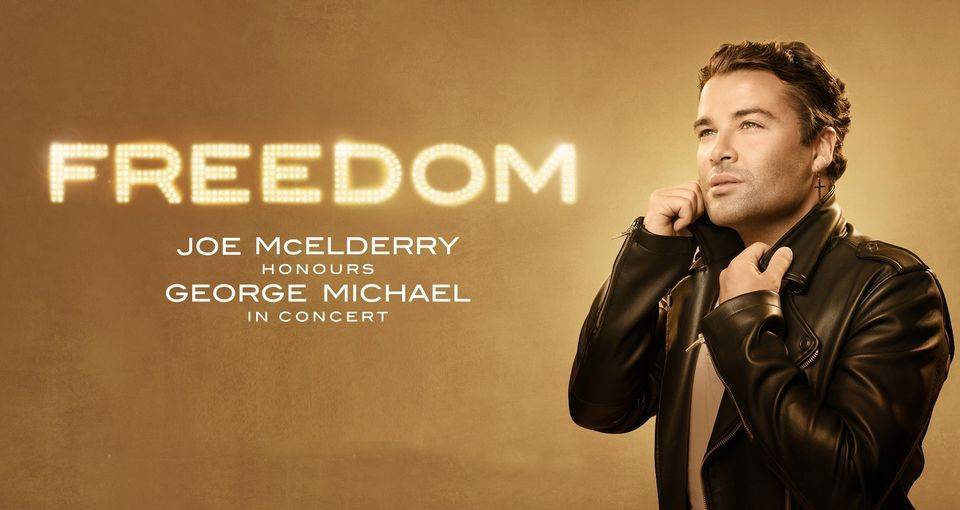 X Factor winner, musical theatre star and number one selling artist Joe McElderry is set to electrify theatres across the UK with a brand-new tour celebrating the music of the late George Michael.

FREEDOM starring Joe McElderry will pay homage to one of world’s most iconic music legends, at venues across England, Scotland and Wales during October 2022.

Joe won the sixth series of ITV’s The X Factor in 2009 following his stunning duet of Don’t Let The Sun Go Down On Me with George Michael. That moment has since racked up more than 7million views on YouTube and is something Joe will never forget.

“To this day I still have to pinch myself that I got to sing with George,” said Joe. “It was an absolute honour and privilege and is a memory that will remain with me forever. To now be taking the brand-new FREEDOM tour on the road where I will get the chance to perform and celebrate the music of this absolute legend is just fantastic.”

This high-energy show will take audiences on an unmissable journey through George’s greatest hits including Careless Whisper, Club Tropicana, Faith, Don’t Let The Sun Go Down On Me, FastLove and many more, all performed by Joe and a full live band.

SO HOW DID THIS TOUR COME ABOUT – WHERE DID THE IDEA TO CELEBRATE GEORGE MICHAEL COME FROM?

I sang Don’t Let The Sun Go Down On Me in around week eight of The X Factor, and it became my performance of the series. It was a massive turning point, and I topped the vote every week after. Looking back, it was the moment at which I won the show.

When it came to the final, unknown to me, there was a lot of negotiation going on to get George on – and he eventually agreed. He was such a huge artist, he was so respected as a singer, a writer and producer, that the show were just as amazed as I was that it happened.

So, I sang with George for the final of The X Factor and it was incredible. Even now, looking back – it’s mind blowing. I’ve done the material in concerts ever since, I’m always asked to sing Don’t Let The Sun Go Down On Me – it’s always been a real fan favourite.

I did a gig in London back in March 2020 – the day before theatres closed for Covid-19 – and theatre producer Jamie Lambert was there. We were talking afterwards and he said‘Why not do a tour to celebrate George’s music?’ But you know what those conversations are like, you go off, carry on and they don’t often come to anything… Never mind throwing a global pandemic into the mix.

We never spoke of it again until early last year, when Jamie got in touch and said he thought it could be something very special so we started taking the idea seriously.

George Michael was one of the best vocal artists of all time around the world. So when someone says do you want to sing those songs and go on tour, of course I’m going to say ‘Yes’… With bells on!

OBVIOUSLY DON’T LET THE SUN GO DOWN ON MEMEANS A LOT TO YOU – IS IT YOUR FAVOURITE GEORGE MICHAEL SONG?

My favourite song is actually Amazing, there’s something really cool about it – but I know it’s not one of the obvious choices. From the ballads, then it’s Careless Whisper. I just love that song.

GEORGE MICHAEL HAS A HUGE CATALOGUE OF INCREDIBLE HITS. HOW DO YOU NARROW THEM DOWN TO PLAN A TOUR?

I’m starting to put the set list together now. You have conversations, write down the obvious ones and you’ve got a show… But you don’t necessarily want to do the obvious, so then it’s the tricky job of taking those out for the more obscure, and there’s definitely some sneaky fan favourites which we want to include too.

My mum and my best friend’s uncle were massive George Michael fans, and saw him live lots, so I’m asking them too from his fans’ point of view.

It’s going to be fantastic. These songs remind people of where they were at certain times and places of their lives, so you want to make them sing and dance along and take them back to those moments.

There are a lot of powerful, emotive songs, some really heart-breaking lyrics, but then there’s also the ones which make you just want to get up and dance.

It’s a blessing to have that music available to us and be putting it all together for a tour.

WHAT’S BEEN THE REACTION FROM GEORGE MICHAEL FANS ABOUT THIS TOUR?

There’s actually been some really lovely feedback from people who aren’t necessarily my own fans, but they were saying ‘You’re perfect to do this’ when it was first announced. And that is just lovely.

I’m not trying to be him. It’s really important to me that people know and understand that. I’m a fan of George’s music, just like they are. And I just want to do that music the best justice I can, and give it the respect it deserves as absolutely timeless, classic songs.

I keep saying ‘it’s not a tribute show’. It’s me, singing George’s songs, putting that incredible music out there again, celebrating it.

HOW DOES IT FEEL TO BE PAYING TRIBUTE TO A MUSICIAN LIKE GEORGE – GIVEN THAT HE’S NO LONGER WITH US?

It may sound a bit odd, but I forget he’s not with us anymore – because the music lives on so strongly, how can he be gone? His death was such a loss for the music industry.

It is so, so sad that we’re in the position to be celebrating George’s music, without him here anymore. There’s no doubt in my mind, if George were still alive today, he would still be a major force in the music industry, still writing and producing, even if not recording and releasing music himself.

WHAT CAN FANS EXPECT FROM THE FREEDOM TOUR?

It’s very much going to be me on stage, me in concert, so if you’ve enjoyed that before then please come along, it will be very ‘normal’ in that sense. It’ll still be my personality, having a chat between songs, but with a different focus on the music, and that will almost give it the feel of a show within a show.

HOW DO YOU FEEL TO BE GETTING BACK ON THE ROAD?

I am so excited! I have done bits and pieces coming out of the pandemic, including a small tour although that was still with some social distancing but it felt amazing. And I’ve been to shows myself recently, where being sat in the audience I could feel people were more relaxed, having a great time and getting that sense of normality back in the room.

I’m playing incredible venues and actually quite a few venuesI haven’t been to before, which was a bit of a surprise when we planned the tour – as I’ve been to so many theatres over the years. So I cannot wait to be there, seeing theatres full of people all having a good time.

IT’S BEEN 13 YEARS SINCE YOU WON THE X FACTOR. HOW DOES THAT FEEL?

I almost get a bit of that imposter syndrome feeling actually… It’s only when someone actually says ‘it’s been 12, 13 years since the win’, that I think ‘Wow’ and reflect.

You know, you win the show, and there’s a kind of expectation that the career will be over in 12 months – whenthe next winner comes along, or maybe two or three years later, then you have to move on from it. So, I am hugely grateful for where I am now.

I work hard, I love performing, I’m blessed to be doing what I do, and want to be doing it when I’m 50. It’s a gift to have people come and see you perform – especially when it’s a project like this which reflects back to the very start of it all.

SINCE THE X FACTOR WAS CANCELLED, THERE’S BEEN SOME TALK ABOUT WHAT HAPPENED BEHIND THE SCENES. WHAT WAS YOUR EXPERIENCE?

I have to say, I loved my time there. I was 18, and very, very young though and – strangely – I think that protected me. I was so naïve and excited to be there, that I lived in a kind of bubble of oblivion, I kept my head down and concentrated on trying very hard to be good.

Now, knowing what I know there’s not a chance I’d do it!

To put it into perspective, we were handed a phone during the series, with a ‘new app called Twitter’, and were told to share little bits of what we were doing, like ‘post a pic of you having a cup of tea’… People forget just how much social media has changed – and how it’s changed society – in those 12 years.

Something like 19 million people were watching, but the only media we really had was newspapers. We finished the results show on a Sunday night, went back to the house, then into the next week’s rehearsals on Monday morning. You could avoid it all. Now, you just type your name into Twitter and see all sorts of things written about you, and that can be a lot of pressure.

OK, SO MAYBE WE WON’T SEE YOU ON A SINGING CONTEST AGAIN… WHAT ABOUT OTHER REALITY TV SHOWS?

I love reality TV! It can be really fun… I did The Jump on Channel 4 and learnt loads of skills, all those winter sports. It was crazy, but brilliant.

I am a very frustrated dancer. I think I dance like Beyonce, but I’m fairly sure I don’t shake it as well as her, but I’d definitely give Strictly a really good go.

I’m A Celebrity… would be fun too – I always say ‘Never say never’. There’s a fair few things I’m terrified of – which I won’t mention in case it ever happens! But I like camping and like getting outdoors, and I can knuckle down through challenges, so I think I’d just get on with it and make the best of jungle life. That said, I’d definitely scream a bit too!

FREEDOM starring Joe McElderry is presented by Cuffe and Taylor in association with Lambert Jackson Productions.Tickets are on sale now from www.cuffeandtaylor.com