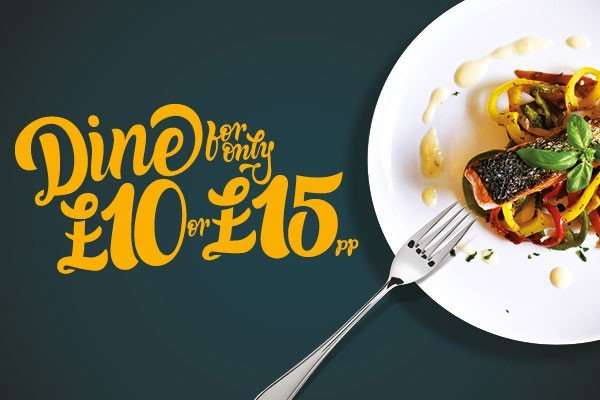 January 2020 will see the 18th NE1 Newcastle Restaurant Week staged in the city offering the public the chance to dine out in style in Newcastle for only £10 or £15 per head.  The event is being held between 20th and the 26thJanuary and is already shaping up to be bigger and better than previous Restaurant Weeks with more new restaurants and with a new Transportation Partner supporting the event.

NE1 has joined forces with bus operator Arriva North East to offer visitors a more sustainable way to travel and to make more of their evening in the city.

Diners can enjoy a return ticket to and from Newcastle city centre from anywhere on the Arriva North East network for only £2, providing they have a printed Restaurant Week voucher, or can display one on their mobile phone.

Arriva North East operates a wide network of local buses, which have the capacity to bring more diners to NE1 Newcastle Restaurant Week while reducing the harmful emissions and congestion of increased visitors into Newcastle city centre, in turn cutting the event’s carbon footprint.

It is hoped that the Arriva partnership with NE1 Newcastle Restaurant Week will actively encourage people to leave their cars at home and make more of their evening in the city by continuing their night in one of Newcastle’s many evening venues.

Over 100 restaurants are signed up to take part in January’s Newcastle Restaurant Week with many of the original founding restaurants of the event taking part again, including the 21 Hospitality Group, the Hooked On Group with Blackfriars and Dobson & Parnell, and Sachins all taking part together with a host of newcomers.

Eight new restaurants are joining the event this January, including Horticulture on Market Lane, Eden, which is near the Gate, My Delhi on Clayton Street, Hibou Blanc in the Bigg Market which scored highly in a recent Secret Diner review, Leila Lily’s on Grey Street, gastro-pub the Greedy Gannet and the Purple Peacock on the 55 Degrees North roundabout.

The newcomers are a mix of independent restaurants and national operators all showcasing the range of dining options available in Newcastle, a city famed for having more restaurants per square mile than any other city in the North of England and more independent start-ups than any city outside of London.  From vegetarian and vegan to Indian street food and British Bistro the new restaurants add something different to the mix and they are all gearing up to take part in their first NE1 Newcastle Restaurant Week event.

Vegan and vegetarian restaurants and menus are well represented in this January’s Restaurant Week, a reflection of the growing popularity of a plant-based diet.

Commenting on this year’s event and what diners can expect, Head of Marketing and Events at NE1 Ltd Ben Whitfield said:

“We have an exciting line up of restaurants long-established and new, all preparing to celebrate this January’s NE1 Newcastle Restaurant Week. We are also delighted to be able to add a new dimension to the event this year with our Transportation Partner, Arriva North East.  Having Arriva on board will hopefully encourage people out of their cars, onto the bus to cut the carbon footprint of the event and allow people to make the most of their Restaurant Week experience savouring all that Newcastle has to offer.

An Arriva North East spokesperson, said: “NE1 Newcastle Restaurant Week is a key milestone in Newcastle’s event calendar and we are excited to be official Transportation Partners for the first time this January.

“Buses play a vital role in reducing the environmental impact of successful events like NE1 Restaurant Week, which see tens of thousands of people travelling into Newcastle city centre. We’re hoping our £2 return journey offer will encourage more visitors to leave their car at home and enjoy their evening without having to worry about driving. “

For details of all participating venues and to download NE1 Newcastle Restaurant Week vouchers visit https://www.getintonewcastle.co.uk/ne1-events/restaurant-week