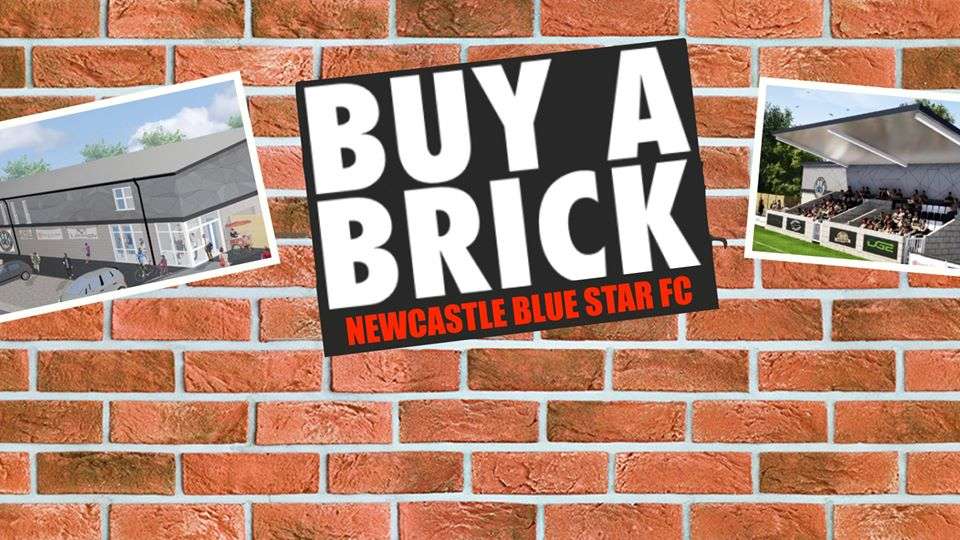 Whilst we await the bigger town news of the Sheikhs arriving in Newcastle, and announcing what we hope to be the take over from Mike Ashley for a better future in the premier league. There is another club looking to the future. Newcastle Blue Star of the Northern Alliance league are about to start development on their own stadium and are giving you a chance to be part of it.

Newcastle Blue Star are giving you the opportunity to have your name on a brick, and become enshrined in Blur Star history on the new community ground being built. For £24.99 this can be yours. We’re all aware that money may be a consideration at the moment, but community hubs like Blue Star I believe must be kept and invested in, as they are a vital hub for the local community. With ties to the Bobby Robson Foundation, Newcastle Foodbank and Scotswood Natural Community Garden they reach out to a wider audience across Newcastle. So for the price of a takeaway, or a couple of cases fo beer – could you buy a brick and contribute?

Its quick and simple to do – just visit the link below. Enter the details and make payment.

Giving back to the fans this season

The club had its season shut down early due to the coronavirus and despite financially losing out, knowing that its season ticket holders didn’t get full value for their money, they extended the season tickets for use next season as well in 20/21. It may not be much money to each person but to the club, it adds up. This is why we should support our local grassroots and lower league clubs because they put the community first. Its the place that people will get an opportunity to play the sport they love, It’s a club that has volunteers at its heart because its for the love of the game. It’s a club where people come together.

Before the club vanished in 2008/09 season, Newcastle Blue Star was a football club based in Newcastle upon Tyne and was established in 1930. They joined the Wearside League in 1973 and won the FA Vase in 1978. Having won promotion to the Northern Premier League the club went through off-field trouble resulting in the collapse of the football club.

Newcastle Blue Star Football Club is now the fastest growing amateur football club in the North East of England, United Kingdom. Our goal is to bring success back to this historic club and to provide top level football for the whole community to enjoy. ​

With vital support from 1978 FA Vase winners Paul Dixon and Ian Crumplin. The club is based in the West end of Newcastle upon Tyne and has ambitions do develop and become a key club in the city.

Have something that’s worth showcasing? I preview, promote and review multiple genres across Events, Leisure or Entertainment then get in touch email and get in touch or message me via instagram at @geordieblogger for InNewcastle.co.uk