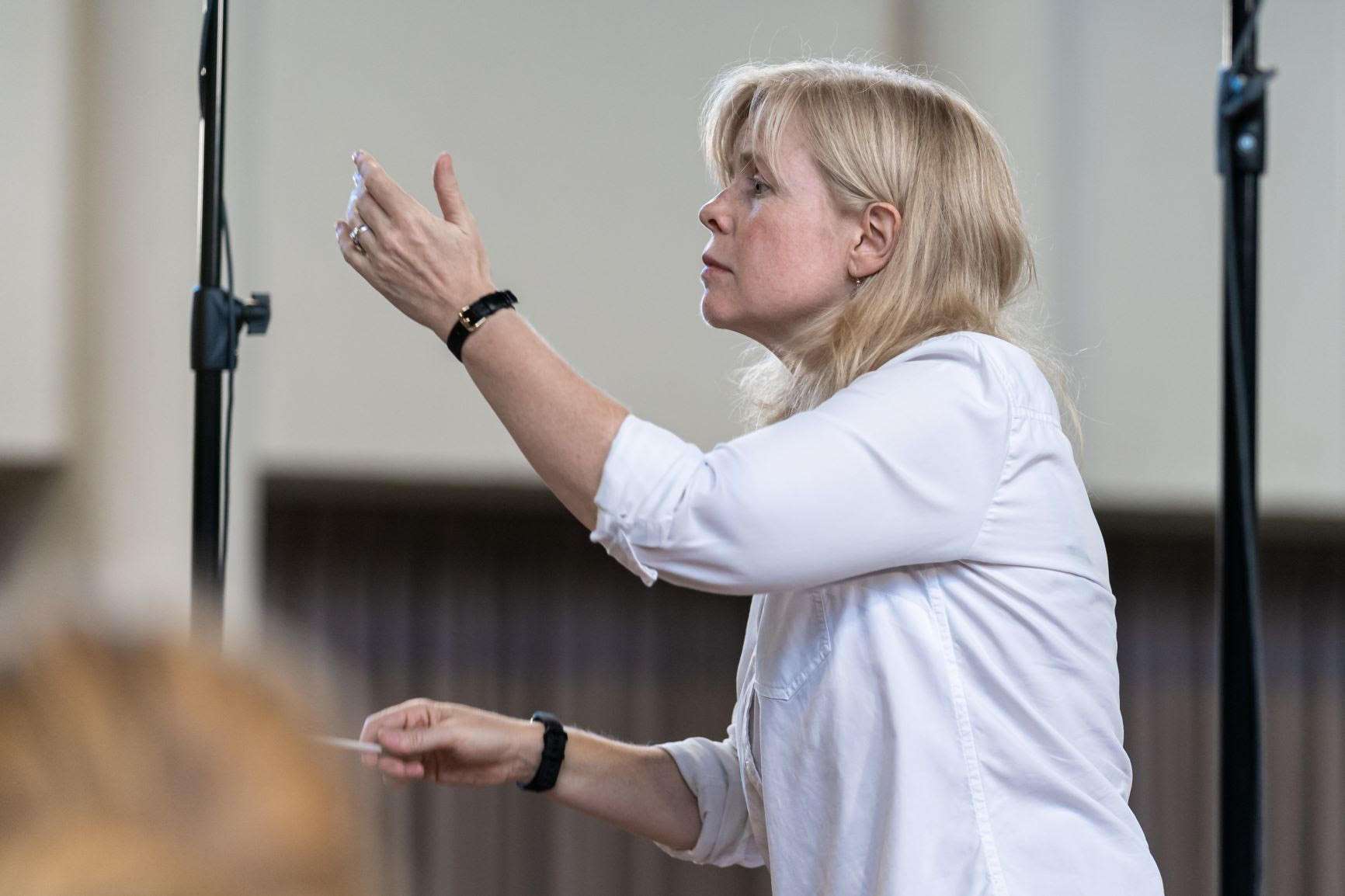 If a post is labelled  #Ad please be aware we have been provided access to or recieved tickets to view or experience the activity free of charge. This includes but not limited to Events, Shows, Hotels stays and Food & Drink. We also  use affiliate links across this site. This means when you purchase a ticket through one of the affiliated ticket providers we will recieve a percentage per sale. The ticket provider  remains your point of contact for all queries.

On Saturday 18 September Royal Northern Sinfonia will return to the stage in front of an audience in a much-anticipated moment, marking the arrival in post of Dinis Sousa, the new Principal Conductor, and Maria Włoszczowska as new Leader of the Orchestra.

The programme that evening, dynamic and eclectic, offers a hint of new ideas and direction for the orchestra apparent through the new work from composer and DJ Mira Calix and filmmaker Sarah Turner commissioned by RNS to reflect on local people’s experiences of the past 18 months, juxtaposed with one of the trickiest works in the cello repertoire Shostakovich’s Cello Concerto No.1 and Dvořák’s sunny Symphony No.8.

The second concert on Friday 1 October, performed live and available online too, focuses around dance and movement. Last Night of the Proms star Ksenija Sidarova joins RNS for Aconcagua, Piazzolla’s Tango-inspired concerto for bandoneon (very similar to an accordion) and orchestra, named after Argentina’s tallest mountain, as it’s so often ranked as the high point of the composer’s music.

Led by acclaimed Portuguese conductor Joana Carneiro, the evening starts with the hypnotic sounds of John Adams’ minimalist masterpiece Shaker Loops, inspired by the rapturous physical movement that the composer witnessed in the Shakers – a Christian sect that has now almost died out, and finishes with a piece described by Wagner as the ‘Apotheosis (the peak) of the dance’ – Beethoven’s euphoric Symphony No.7.

Legendary pianist Elisabeth Leonskaja makes a rare appearance in the North East on Sunday 17 October for an afternoon of Schubert. One of the most celebrated pianists of her generation, she will perform a programme that includes Schubert’s emotionally expressive last three piano sonatas.

Nordic Magic is the title of the fifth concert in the season on Friday 5 November. Conducted by bassoonist-turned conductor Catherine Larsen-Maguire and joined by clarinettist and magician Magnus Holmander, RNS will delight audiences with Sibelius’s sleek Symphony No.3, typically simplistically Scandinavian in design. Grieg’s Holberg Suite brings the vast Nordic landscape to Sage Gateshead and its audiences. And returning to the crisp Scandinavian simplicity Nielsen’s Clarinet Concerto welcomes Magnus Holmander to the stage for a magical performance.

Sir Roger Norrington takes the podium for the final concert in this glimpse of the autumn plans for Royal Northern Sinfonia. On Thursday 18 November Norrington Presents: Dr Haydn’s London Academy brings together several movements and works from Symphonies to string quartets to celebrate Haydn – the radical, the genius and the entertainer. Hailed as a musical superstar across Europe in his day, Haydn was incredibly inventive. English, operatic soprano Susan Gritton joins for his English Canzonettas. Audiences can catch this concert live in person or streamed live online.

Six Sage Classics are just the start of the RNS programme for next season. Further concerts will be announced from September onwards in a new approach to programming with new concert formats on the horizon. In response to positive feedback about the live streamed concerts during lockdown, Sage Gateshead will continue to offer some concerts as live streams as well as in person events. Three of the six announced concerts are available to watch online (Dance! on 1 October, Mozart’s Great! on 22 October and Norrington Presents: Dr Haydn’s London Academy on 18 November).

The classical music programme sits alongside a diverse offer of gigs from artist and bands across all genres, a huge array of music classes – from ukulele, to pop singing and sessions for under 5s – and support for artists. More information can be found at www.sagegateshead.com

Information on what to expect when visiting Sage Gateshead will be available on the website later in August.

Sage Gateshead is offering a coach to the RNS concerts on the 18 September, 22 October and 5 November from Hexham via Chollerford, Wall, Acomb, Eastwood and Corbridge; Alnwick via Amble, Warkworth, Felton, Morpeth, Wideopen and Gosforth; and Carlisle via Brampton. To book, call the Box Office on 0191 443 4661 or visit sagegateshead.com. Please note that coach tickets are not refundable.

Dinis Sousa, Principal Conductor designate of Royal Northern Sinfonia said:  “After 18 months that have brought so much disruption and uncertainty to the performing arts, it is a joy simply to share details of new events, but of course for me it is a particularly special moment – my first concerts as the new Principal Conductor of Royal Northern Sinfonia.

Even with the ups and downs we have endured over the last year, it has been a wonderful experience for me to work with my friends in the orchestra on several exciting projects, but the one thing that I haven’t yet been able to do properly is to meet our audiences, something which I very much look forward to this autumn.

“Our concerts this autumn cover a huge range of music, from a feast of Haydn conducted by a specialist in this repertoire, Sir Roger Norrington, through to a unique new commission in my first concert of the season, as well as symphonies by Mozart and Dvorák, and, along the way, some remarkable guests.

“These six Sage Classics events are however just the start of our programme for next season – we have so much more being planned, with further events being announced from September onwards.

“It will be a thrill to step on stage and make music with Royal Northern Sinfonia this autumn – I simply can’t wait!”

Abigail Pogson, Managing Director of Sage Gateshead said: “Royal Northern Sinfonia have been active through the pandemic with live streams, socially distanced concerts, outdoor performances over the summer and recording digital content. But they cannot wait to get back to making music in Sage Gateshead in our building with their new Principal Conductor and Leader. We’re excited to also continue online, building on what we’ve been doing during the pandemic and we’ll be doing this across our programme – with Royal Northern Sinfonia, with a fantastic rosta of contemporary gigs and with all of our courses and classes. We are determined to contribute to the North East’s recovery by bringing people together, supporting health and wellbeing, and nurturing the great talent in our region.”

The Covid-19 pandemic created a financial emergency for Sage Gateshead. In 2020/21, 80% of its income was affected and the organisation had to adapt. They have weathered the storm thanks to the support of many generous people and organisations, and the investment from Arts Council England and DCMS.

Looking ahead, the impact of the pandemic will be felt deeply. Sage Gateshead is determined to play a proactive role in its region’s recovery. Meanwhile, operational and financial challenges continue, with box office and trading income set to be half of that in a pre-Covid year. This year, it again needs to raise £1 million through its Crisis, Recovery and Renaissance campaign, to ensure it can continue to share world-class music including by its fantastic orchestra, support its communities’ health and wellbeing, and create inspiring educational opportunities.

Those who would like to help Sage Gateshead and Royal Northern Sinfonia, can donate online on www.sagegatehead.com/support or get in touch with Natalie.Heath@sagegateshead.com.

Thanks for reading. Keep up to date by following our social accounts or by subscribing to our mailing list to have the news delivered to your inbox.

Booking.com
Continue Reading
You may also like...
Related Topics: