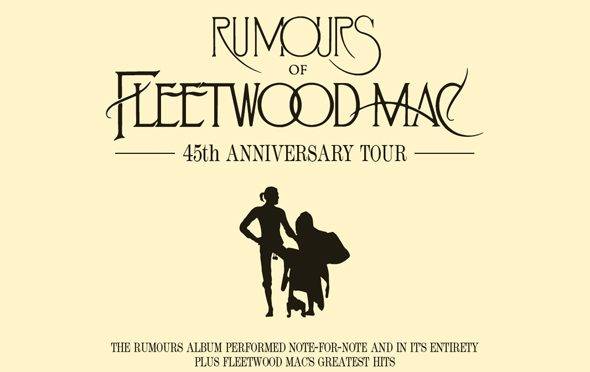 Listen to the wind blow, watch the sun rise as Rumours of Fleetwood Mac are back!

To be honest this is the third time I’ve seen the band now and fourth time the website has covered them, and I think they are one of, if not the best cover bands out there. I always get excited when I see the date for Sage Gateshead pop up when announced.

Brought to us by the team behind The Classic Rock Show, staging is very similar with a multiple strips of video projection behind the band. So if you have attended any of these shows this is the Fleetwood Mac version.

Channeling the spirit of Fleetwood Mac at their very best, Rumours offer an opportunity to rediscover the songs and performances that have ensured Fleetwood Mac’s place as one of the most loved groups of all time.

Personally endorsed by Fleetwood Mac founding member, Mick Fleetwood himself gives an introduction at the start of the show.

Celebrating the Rumours album song by song, we got a retelling of the album. This retelling highlights the best known songs to most that aren’t familiar with the band, or most fans favourite album this track listing literally goes from hit to hit. I still can’t think of many albums that genuinely have so many classic songs that live through the ages as well as being top hits.

Jess Harwood always shines in her role of lead singer Stevie Nicks as always. Dressed appropriately in her long wavy dress, she recreates Nicks mannerisms perfectly and has a voice as good as any.

Emily Gervers brings a powerful voice to her performances in her role of Christine McVie on lead vocals and keyboard.

James Harrison on Lead Vocals and Guitar as Lindsey Buckingham brings a solid confident showing too.

The album was finished early in the first interval and to conclude the first half we got to see Dave Goldberg in the role of Peter Green who many credit for Fleetwood Macs success. This is Goldbergs moment at the front and does great in a fabulous homage to the original line up.

The second half was enjoyable and still we had many a great song left for them to come out and shine with.

With my knowledge of the band and music, a lot of my personal favourites were on the Rumours album and so I felt like it peaked early and levelled out a bit but there’s many more hits for people to enjoy. Everyone will have their own favourites and maybe even disagree with me on my feelings but at the end of the night myself and plus one Kieran were still in the aisle dancing away with many other audience members. (Some of whom were up dancing from literally the second song).

If you are seeing the band this coming Wednesday 28th June, I will say that Rumours of Fleetwood Mac continue to remain an amazing band to see and despite my feelings of peaking early, I found the night to be hugely enjoyable. I will of course keep an eye out for the next tour and who knows by that time the Sage Gateshead may just have a new name!

Disclosure: Tickets had been gifted to see the performance.