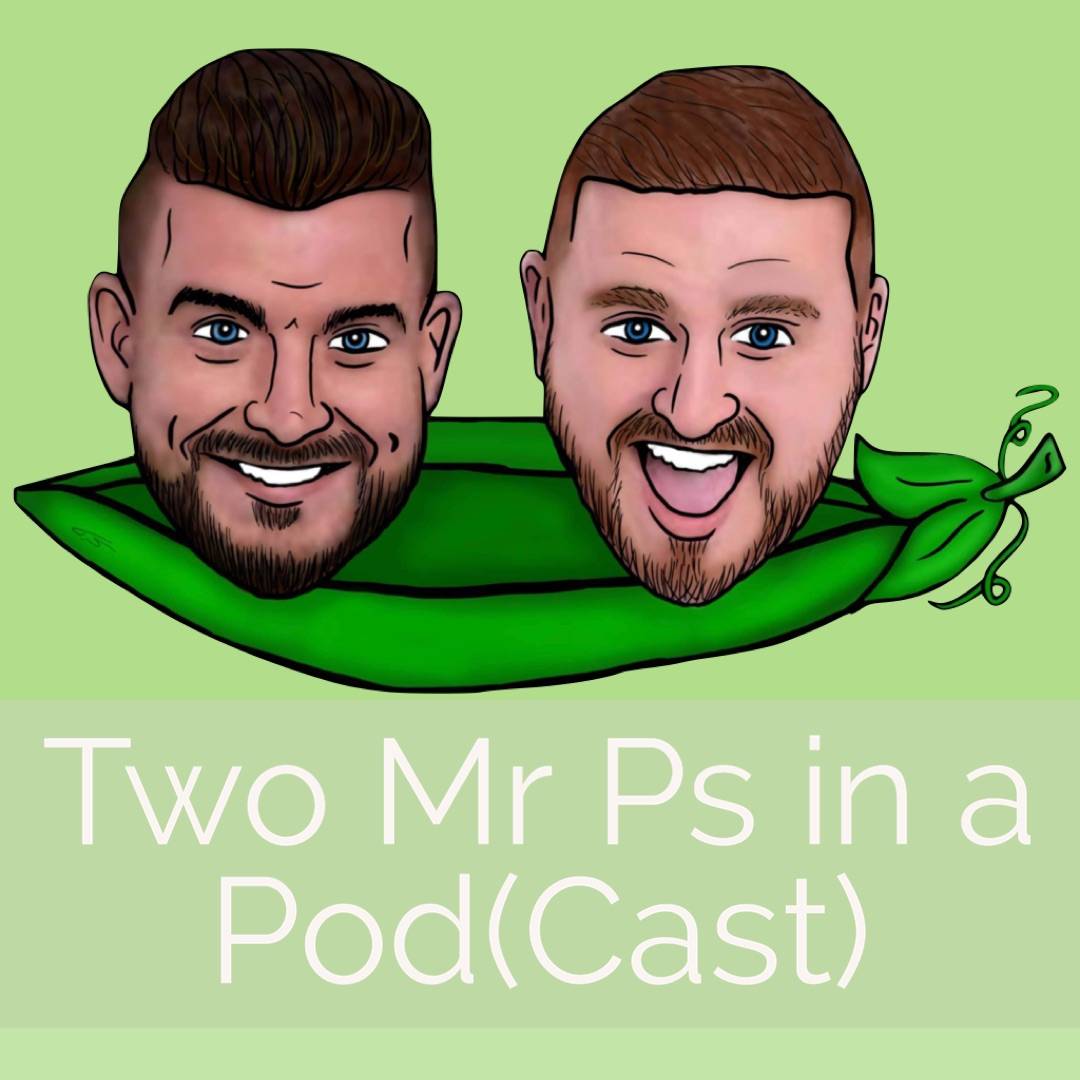 Teaching and podcasting sensations the Two Mr Ps have announced they’ll be taking their award-winning podcast on a new string of 41 live dates across the UK in 2022: Two Mr Ps in a Podcast (LIVE).

In this syndicated interview, Lee and Adam Parkinson – the two brothers who both still work on the front line in primary schools – discuss the huge success of the podcast, what audiences can expect from their jubilant live shows this year and the release of their Sunday Times number 2 bestselling debut book (set to be released as a paperback on 14th April 2022).

Tell us a bit about yourselves – how long have you both been working in schools & what do you love most about working in education?

Lee: I have been a primary school teacher for over 14 years and still work part time in school. For the past few years, I have also been running a business where I lead training sessions for teachers and schools, looking at focusing on utilising technology more effectively in the classroom. For me, teaching is and should always be, about the children and that’s why I still love working in the classroom each week. It is all the other stuff – paperwork, lack of trust, constant scrutiny that I can’t stand. There’s something very special about seeing children develop and having a helping hand in that. The fact children are the most unintentional comedians on the planet also brings so many moments of hilarity. No day is ever truly the same.

Adam: I have worked in schools as a teaching assistant for ten years. I absolutely adore working with children and helping them realise their potential. School days can be the best days of your life, I just try my best to make sure the children leave with amazing school memories.

What made you both decide to start ‘Two Mr Ps in a Podcast’ in 2018? What should listeners expect from the podcast?

Adam: I personally had no idea what a podcast was! But whilst we were sat at dinner, Lee suggested we call the podcast 2 Ps in a pod, which I quickly suggested we change to 2 Mr Ps in a Pod(cast). From that point I think we knew we had something special.

Adam: We also talk about funny mistakes either in work or in your personal lives, getting things embarrassingly wrong, which will make you laugh and cringe in equal measure. We also look back at the differences from our school days and the nostalgic things we no longer have, like poor overhead projectors, they were a stalwart of any school!

Within a year, the pod has sat as the number one education podcast, amassed over 4m listens & won awards. Why do you think it has resonated so strongly with listeners?

Adam: I think we always had a bit of a head start given the platform Lee has worked hard to build up online over the past few years.

Lee: Yes, the response to the podcast has been unreal. Everyone went to school and everyone has funny stories from their school days. Whether you work in a school or not, the podcast reminds you of those happy, innocent days. For people working in schools, I think during the lockdowns the podcast became something that really helped. Despite what some people think, schools were never closed during the lockdowns and teachers worked tirelessly to help and support those vulnerable and key worker pupils whilst also supporting children learning from home. However, due to bubbles and social distance measures, teachers weren’t able to interact with each other the way they usually would. I think we’ve all come to appreciate the importance of having a chat with a friend or colleague for 5-10 minutes about anything other than work. It seemed that for a lot of school staff, the podcast almost became like a staffroom and alongside the Facebook group, it was able to keep them company during those tough months.

Adam: I’m just buzzing that a weekly chat with my brother, has brought so many people laughs over the past few years, long may it continue!

In the podcast, you invite teachers to anonymously send in any hilarious & cringe-inducing stories from their own classrooms. What story has been your favourite and why?

Lee: There are so many, I don’t know if I could choose just one. I think a story that always seems to be talked about is the one where a teacher went on a night out and ended up going back to a guy’s house. After doing what two consenting adults do, she went to the toilet and, staggering out of the bathroom half naked, she was greeted by the father of the guy who she’d just been intimate with. The father, who was not impressed and stood there staring intimidatingly, turned out to be her headteacher! The embarrassment! I reckon the next staff meeting would make for one awkward conversation. That is one lesson observation she’ll never live down.

Adam: Wow, honestly, there are such a bank of golden tales we have spoken about during the previous episodes but the ‘teacher tired’ tales always make me laugh. Like the teacher who left the house and got in her car thinking to herself that her legs were quite chilly, only to realise she hadn’t even put trousers on…classic.

Of your own experiences in classrooms, what is your favourite story to re-tell?

Adam: This always makes me laugh, as kids really do say the funniest things. A young girl approached me on the playground and said ‘Sir, do you want to hear a joke?’. I responded enthusiastically ‘I’d love to!’ She moved in closer and said ‘YOU!’ Then walked off. I was a 33 year old man who had been completely shot down by a 6 year old!

Lee: Again, there are so many, but one that is brought up in our staffroom regularly is the story of the bum touch. I had managed to lose some weight to the point where it was noticeable, and my trousers were starting to be too big for me. One day, I forgot to put my belt on and spent the day pulling my pants up at every given opportunity. Little did I know, my eagle-eyed class noticed this and invented – ‘THE BUM TOUCH!’ They would watch my movements intently and anything I touched would then have the bum touch. The children would then run around the playground chasing each other spreading the bum touch. I was completely oblivious until a parent came to speak to me as their child was in floods of tears after getting the bum touch. I assumed it was created by a child about another child so went on a passionate talk with the class about how hurtful that can be and at the end of the talk one of the class turned around and said, “You invented it by touching your bum.” It has giving me quite the complex.

You’re now touring new dates of the live version of the podcast throughout 2022 – do you enjoy being on stage & what can audiences expect from the live show?

Adam: The Two Mr Ps after dark! The show is 90 minutes of pure laughs, we share some home truths and we rib ourselves for the enjoyment of the crowd.

What has the feedback been to your previous live shows?

Adam: The feedback has genuinely been amazing, so many positive comments and reviews, from everyone from the audience to the theatre workers, people who have no affiliation to school love the show, there’s something for everyone.

Lee: We know that a lot of school staff come along to the show and love it, but we’ve been surprised with how many people come along that don’t work in school but just love having a trip down memory lane and laughing along to all the stories and observations.

What do you find scarier – performing to your live theatre audiences or trying to keep control of a class over zoom during lockdown?!

Adam: If my primary school teachers heard I was a Sunday times best selling author, I’m pretty sure they would choke on the coffee they would most likely be drinking. It was an amazing achievement, and to do it alongside my brother made it extra special. Thank you to everyone who grabbed a copy. If you haven’t read it, grab a paperback, you won’t be disappointed!

Lee – you have an extremely strong presence on social media, now as one of the most followed teachers in the UK. What content do you tend to put out & what reaction does it get from your followers?

Lee: I try to share content that hopefully help teachers and school staff. That can be in the form of tips, ideas and lesson activities that might inspire teachers but also funny observations of all different elements of life as a teacher. I am always motivated knowing it can raise a smile after a tough day in the classroom for some. I often receive messages from teachers and school staff who will say they’ve had a dreadful day in class for one reason or the other, but after watching one of my videos it’s made them laugh and realise that it isn’t just them, we all go through the same struggles.

What would you like the future to hold for the Two Mr Ps?

Lee: I hope we can continue to grow and spread laughs and positivity within the education world and beyond. We’ve been working hard on a follow up book and hoping the tour goes down well as we’d love to do as many shows as we can to as many people. I’ve got a couple of other top secret projects that I am hoping I will be able to reveal very soon.

Adam: I just want to carry on doing what we’re doing, the continued messages of support we get from all walks of life is mind blowing. We have been able to welcome some celebrity guests onto the podcast which is always fantastic, so Dwayne Johnson if you’re reading this, hit us up! Finally, I would love the Two Mr Ps to eventually get some TV appearances, even though I’ve been told I have a face for radio, I think we could do a great hosting job!

Read the preview of the show here.