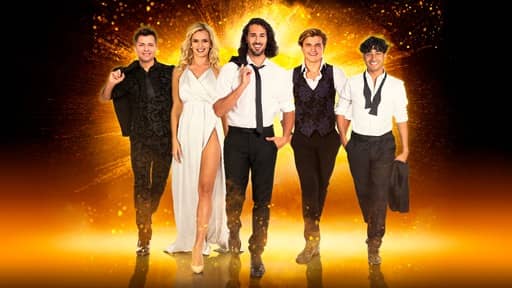 Having dazzled audiences in 2019, the dance spectacular Here Come the Boys will be sashaying back to Newcastle Theatre Royal with a host of Strictly favourites on Sun 24 Jul 2022.

Graziano Di Prima, Nadiya Bychkova, Pasha Kovalev and Nikita Kuzmin will be joined by Strictly finalist Karim Zeroual for the critically acclaimed West End smash hit show alongside a fabulous cast of dancers, all backed by a huge LED screen and a lavish production.

Born in Sicily, Graziano Di Prima joined Strictly Come Dancing in 2018 when he was paired with radio DJ Vick Hope. Having made her Strictly debut in 2017, Nadiya Bychkova enjoyed her best ever finish last year when she finished fifth with her partner Dan Walker.

Pasha Kovalev is one of the hit BBC show’s most successful professional dancers having competed in four finals where he finished runner up with Chelsee Healey, Kimberley Walsh and Ashley Roberts and crowned champion with Caroline Flack.

Originally from Ukraine, Nikita Kuzmin moved to Italy when he was nine, before moving to Germany when he was 18. Before joining Strictly, he was a professional dancer on Germany’s version of Strictly. He is also the holder of six Italian Championship titles.

Here Come the Boys features a cutting-edge soundtrack of dance floor anthems, club classics and guilty pleasures; this show-stopping dance extravaganza promises to be the biggest party of the year!