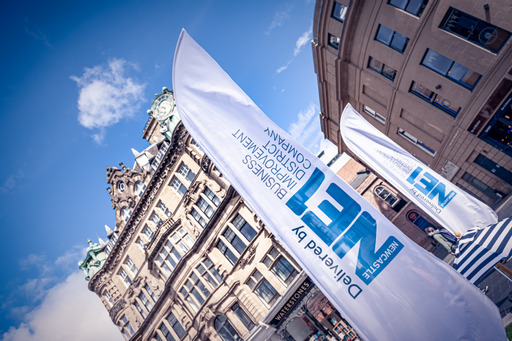 FROM TYRE FLIPPING FUN TO FAIRGROUND RIDES AND MELA IN THE CITY,

After last weekend’s world record breaking tyre flipping fun at the Blackett Street takeover, NE1 is looking forward to two more family fun weekends to round off the summer closures, with fairground rides heading to the pop-up park this weekend and ‘Mela in the City’ the following Bank Holiday weekend for the last of NE1’s Summer in the City closures .

Last Saturday and Sunday, six tyre flipping world records were attempted at NE1’s Blackett Street pop-up park and the results submitted to the Guinness World Record organisation for authorisation. Full validation of the attempts is expected in the next few months. As well as chasing Guinness World Records, the tyre flipping challengers were helping to raise money for two local charities, Tiny Lives and Grace House. The donations are still being counted but the team expect to have raised thousands of pounds.

The unusual event attracted a lot of interest from the public and some willing volunteers who helped complete the challenges and raise money for charity, as well as hopefully securing numerous World Records for the event and its participants.

In addition, on the Sunday a Firewalk was organised raising further money for Tiny Lives and CHUF. The event saw over 50 people walking the embers and having fun.

One of the organisers of Newcastle Goes Flipping Mad, Phil Pugh said:

“After sailing the Atlantic for charity a couple of years ago with teammate Paul Hopkins, we were looking for a new challenge and something different to do. The idea to take on the Tyre flipping World Records came to us in a light bulb moment when we were in the gym doing tyre-flipping as part of a workout. We discovered that tyre flipping was a thing and we set about to break the world record and set some new ones. Many of our team are still recovering from the exertions of the weekend but they all really enjoyed it. There’s nothing better than the camaraderie and togetherness that this type of physical challenge creates and all in aid of charity. It was great to bring the event into the heart of the city – thanks to NE1 for hosting us at the Blackett Street takeover.”

“Huge congratulations to the teams involved in last weekend’s tyre-flipping challenges. We were keen to bring different activities into the city as part of NE1’s Summer in the City programme and Tyre flipping world record attempts are certainly different!

We have worked with the organisers in the past and wanted to support them in their continued efforts to raise money for local charities and for their work in the local community. It is great to have different activities going on in the city over the summer and we are looking forward to the fairground rides this weekend and all the colourful celebrations of the Mela the weekend after.”

Following the World Record attempts, this weekend there will be all the fun of the fair with fairground rides arriving on Blackett Street for the first time this summer, adding more fun things to do for families at the takeover. Fairground rides had been planned for earlier in the summer programme but the weather and forecasts of thunderstorms put paid to that. This weekend, come rain or shine, the fairground will take shape on Blackett Street near Old Eldon Square.

The final weekend of the summer takeovers is also ramping up to provide a grandstand finish to the August closures, with the organisers of Mela, which takes place each year at the Exhibition Park, bringing their “Mela in the City’ event to Blackett Street on Saturday 28th August. Newcastle Mela is a free, family-friendly event that has been taking place in Newcastle for over a quarter of a century.

The much-loved annual event gives visitors a truly authentic experience of South Asian culture and is a highlight in the region’s cultural calendar.

On Saturday 28th between midday and 4pm, Mela in the City will showcase performances by three outstanding singers within the British Asian music industry, as well as running a host of free family activities and entertainment: spectacular Dhol Drumming (special South Asian drumming), Bhangra dancing, arts and crafts and henna tattoos, as well as the Spice FM Radio’s Roadshow.

Blackett Street will remain closed for the three-days of the Bank Holiday weekend, giving people even more chances to visit and enjoy the last of this year’s NE1’s Summer in the City family fun weekends.