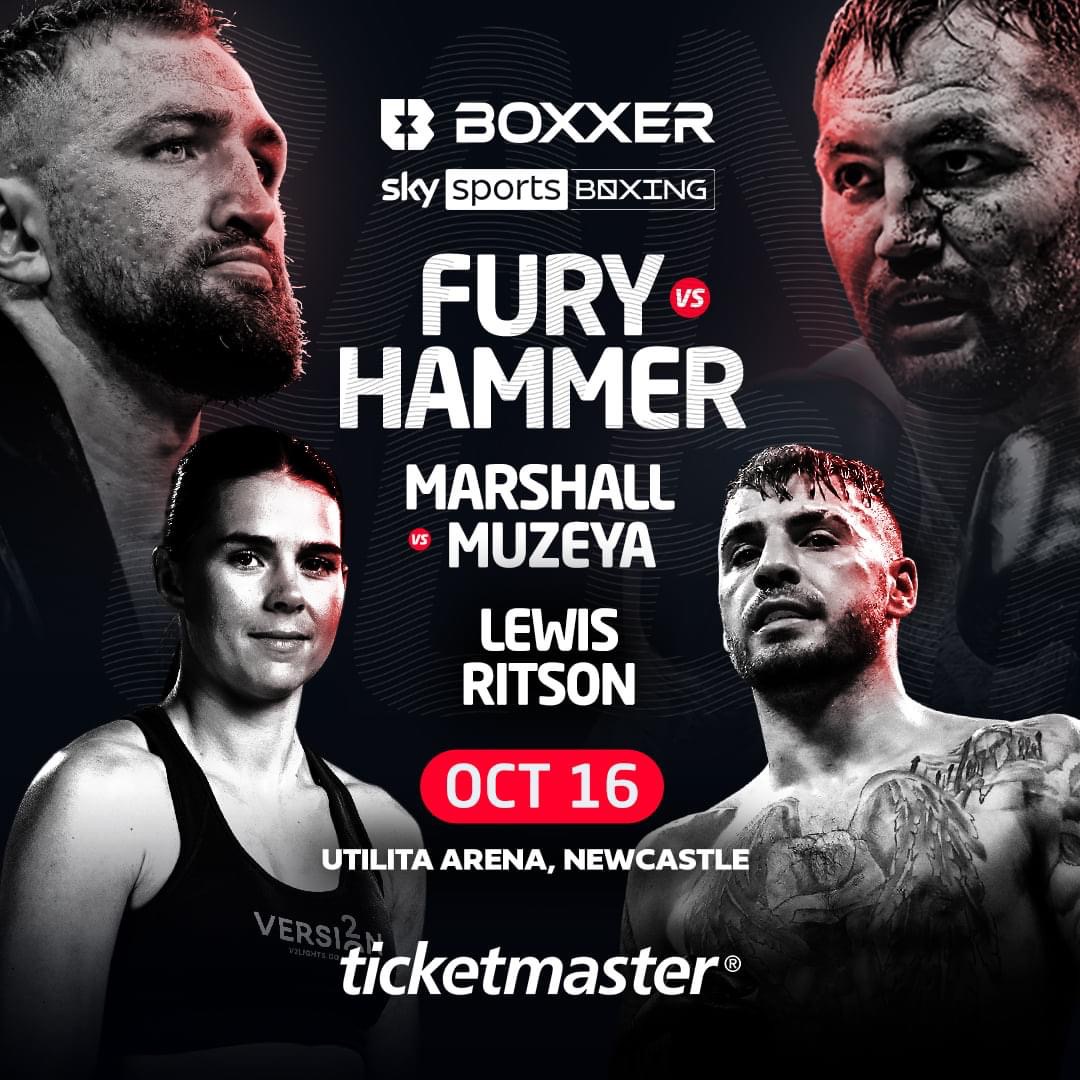 Heavyweight contender Hughie Fury returns to the world title trail, Savannah Marshall lays her WBO middleweight championship on the line and hometown hero Lewis Ritsonlooks to put on a show for his city when BOXXER visits the Utilita Arena Newcastle on Saturday, October 16.

The trio top a card stacked with standout British talent which will air live and exclusively on Sky Sports. Tickets are go on sale  at Midday on 2nd September 2021

Fury (25-3, 14 KO’s) faces the heavy-handed Christian Hammer (26-7, 16 KO’s) and will be keenly aware that Hammer’s last visit to the UK saw him maul former British and Commonwealth champion David Price before stopping him in the seventh round.

Coming off a dominant but blood-soaked unanimous decision win over Mariusz Wach in December, former British Heavyweight Champion Fury is looking for another comprehensive victory to cement his position as a global top-ten heavyweight and return his name to the world title conversation.

Having won the WBO Middleweight Championship by way of a seventh-round stoppage of Hannah Rankin, then retained it with a third-round stoppage of Maria Lindberg earlier this year, Fury’s stablemate Marshall (10-0, 8 KO’s) will be looking for another highlight-reel win when she faces Zambia’s Lolita ‘The Black Diamond’ Muzeya (16-0, 8 KO’s)

A successful defence in Newcastle could also open the door to a long-awaited showdown with Claressa ‘T-Rex’ Shields (11-0, 2 KO’s).

Undefeated as a professional, the only loss of Shields’ 77-1 amateur career was at Marshall’s hands. A rematch under professional rules would be a superfight of global interest and both boxers are keen to settle their issue.

The former British Lightweight Champion narrowly missed out on becoming mandatory challenger to undisputed world lightweight Josh Taylor in his last outing. His road back to world title contention begins October 16 in his home city, where his thousands of fans in attendance will send up the famous ‘RitsonRoar’ as their man makes his way to the ring.

“Newcastle is without doubt one of the UK’s great sporting cities. Ask any athlete from any sport and they will all tell how much they love performing here. Newcastle was high on our list of cities we wanted to visit with an event as soon as possible and we’re delighted to be bringing an action-packed card like this to ‘The Toon’ on October 16,” said Ben Shalom, CEO, BOXXER.

Airing live and exclusively on Sky Sports, the confirmed card to date is as follows, with further bout confirmations to be announced in the coming days: