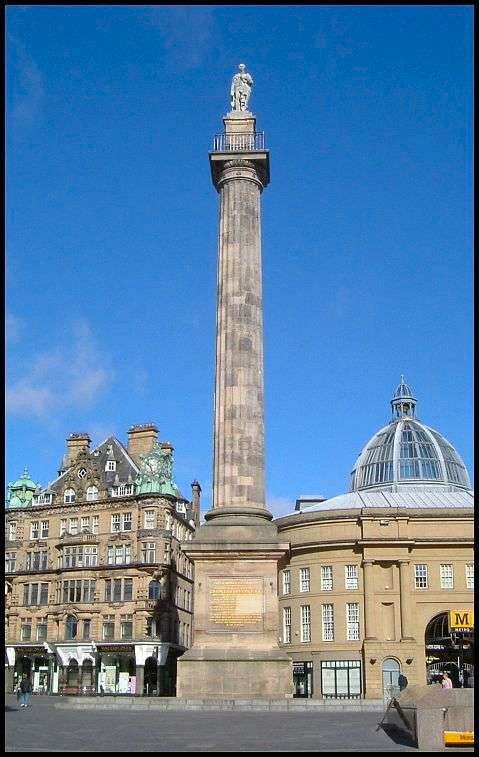 Meet you at Grey’s Monument!

So we’ve all seen Grey‘s Monument on the news or social networks during the current protests. We have all walked past it. On the way to work, on the way to the shops. We use the Metro system that has borrowed its name from. We use it as a meeting point, to congregate on. It’s a focal point for buskers, celebratory events and protests alike. It also has its own song by Maximo Park, ‘By The Monument’ which it refers to.

But what is it, why is it here ? and who does it celebrate?

Grey’s Monument is a Grade I listed monument to Charles Grey, 2nd Earl Grey built in 1838

It was erected to celebrate Earl Charles Grey for the passing of the Great Reform Act of 1832 and stands at the head of Grey Street.

It’s a 135-foot-high or 41 m in total. The column was designed by local architects John and Benjamin Green, and the statue was created by the sculptor Edward Hodges Baily (creator of Nelson’s statue in Trafalgar Square).

It was paid for by public subscription, and was supposed to be 150 feet high, but didn’t raise enough money!

In July 1941, during World War II, the head of the statue was knocked off by a bolt of lightning. In 1947, sculptor Roger Hedley created a new head based on the preserved fragments of the original.

It has a spiral staircase which leads to a viewing platform at the top of the monument, which is occasionally opened to the public. Normally Bookable here.

Who is Earl Charles Grey you ask?

Grey was elected to Parliament for the Northumberland constituency on 14 September 1786, aged just 22. He became one of the major leaders of the Whig party in a short space of time. After years in Government and various roles, he became Prime Minister between 1830-1834.

Grey’s government passed the Great Reform Act of 1832, a move which would lead to wide-ranging changes to the nation’s unfair electoral system. Local people believed he deserved a monument.

So what was the Great Reform Act we’re celebrating him for?

It was a British law that reformed the electoral system by abolishing tiny districts, gave representation to cities, gave the vote to small landowners, tenant farmers, and shopkeepers and to householders who paid a yearly rental of £10 or more and some lodgers. This had helped pave the way for the modern voting system.

His government also saw the abolition of slavery in the British Empire, in which the government purchased slaves from their owners in 1833.

So that’s a little history about Grey’s Monument to be able to tell your friends next time you walk past it.

Lastly….yes this is the man the tea Earl Grey is supposedly named after!