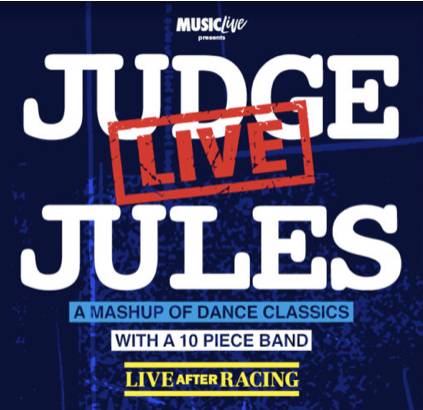 It was end of the week and what a way to start it! Newcastle Racecourse was providing a weekend of music performances to go alongside the celebration of Northumberland Plate weekend.

It started with one of the music scene’s best-known names in the industry for more than three decades, Judge Jules.

After attending early to get some early races in and seeing some bets almost come in…(almost being the operative word.) As it neared the evening we had a mini rain downpour but this passed quickly. I stood beer in hand awaiting the main event with crowds gathering quickly for Judge Jules. Not even the rain could dampen this feeling! All the lads and lasses dressed up to mix some horse racing with a night out of music! Yes this really felt like the start of the summer!

I read that Jules had complete creative free rein, and was behind every element of the performance and in watching the show you could see the input he had. Each track was as described; bespoke, reinvented and reworked – all for this live show.

With backing from a full ten-piece band, inclusive of brass, percussion, drums, guitars, keyboard, singers, and of course Judge Jules himself. This was a live spectacle that lasted for just over 90-minutes where we got to dance to the music that covered the breadth of his career.

“There is something about music being played live that never fails to send shivers down your spine – it doesn’t matter what the genre is, hearing a track performed by live musicians on stage is something you cannot replicate in the studio, or even on the best nightclub environment. So, I decided to create my own bespoke versions of my all-time favourite records with a specially selected band. It’s taken a long time to put together, but finally we look forward to taking the “Judge Jules Live” tour on the road. This truly is a new take on the ‘live dance music’ phenomenon and the tour bus starts rolling shortly.” – Judge Jules

With the above said, I can agree there is nothing better than a live music event. No matter what generation was watching, there was something for everyone.

Jules created an atmosphere that brought us all into a bubble. Hands in the air, feet shuffling, the crowd dancing away. From the beat of the drum to the sound of the trumpet we were engrossed.

The Judge came and after testimony delivered a verdict of an amazing night of music and brilliance that set me free. It was a true pleasure to see this legend in person too. The live band were brilliant, and tied in with the racing made for a great afternoon and night out.

Disclosure: Tickets were gifted by Sonic PR to attend.